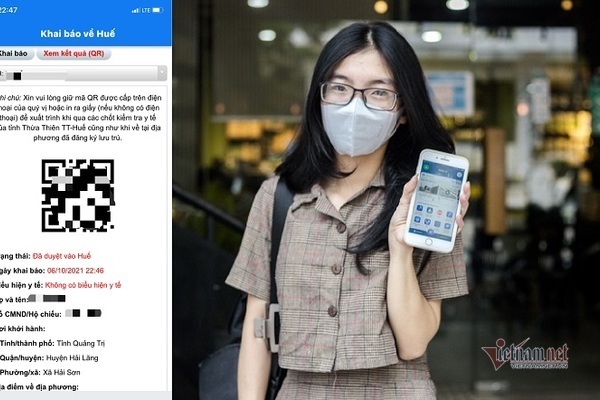 The man was discovered quickly thanks to information from the public. He resided in Thuy Bieu Ward. In an attempt to evade the required concentrated quarantine, the man took a train from Kim Lien Station in Da Nang City and detrained, where he waited for his girlfriend to pick him up.

The two individuals were taken to the local clinic, where they had to follow anti-pandemic measures.

This was just one of the cases that show the efficiency of the use of technology in urban management.

Director of the Thua Thien - Hue Information and Communications Department Nguyen Xuan Son said when the pandemic broke out, the province’s leaders asked to apply technology to disseminate information about Covid-19 prevention and control.

There are two major information portals – the information portal of the provincial People’s Committee and the website of the center, together with two fanpages of the two websites. These portals, plus Zalo, the Vietnam-run social network, have helped people access and exchange official information.

The provincial authorities and people can also connect through Hue-S platform.

In an effort to ease difficulties in making medical declarations, Thua Thien - Hue took the initiative in contacting Ministry of Health (MOH) and Ministry of Information and Communications to connect data. Instead of making declarations on MOH’s system, people can do this on Hue-S app and the data will be connected with the ministry’s system.

“With 500,000 users in the province, Hue-S has created favorable conditions for people to make health declarations, helping the number increase rapidly,” Son said.

According to Son, when applying IT in pandemic prevention and control, the province discovered an important problem – only 700,000 out of 1.3 million people in the province have a smartphone.

Son and his co-workers also found that the plan to apply technology to control the pandemic may be useless if people don’t have smartphones. Meanwhile, many smartphone users don’t have necessary skills to use apps, and many areas don’t have radio waves.

The problem prompted them to build a card system generating QR Codes for all people.

Thua Thien - Hue has activated tens of thousands of QR Codes for agencies and public places such as schools, markets and hospitals.

When citizens visit places, they open the camera to scan the code and register information. All the information about people will be transmitted to the command center, and is kept confidential.

A problem was that many people do not have smartphones to scan the codes, and many people are not required to scan codes to enter agencies and offices.

Therefore, it was necessary to create one QR card for each citizen.

According to Son, the national QR Code is the strategic policy of the Ministry of Information and Communications (MIC) and the ‘dream’ that Thua Thien - Hue province began cherishing five years ago.

On September 19, 2021, after the national QR Code was connected, Son presented his initiative of providing Pandemic Control Card with national QR Code. The plan was approved by the provincial authorities.

Under the plan, all 1.1 million people of the province get cards within a month. A card contains a QR Code for a citizen. People can choose either a paper or plastic card, or use an e-card on Hue-S.

The card will be used as a passport for all citizens if the locality applies anti-pandemic measures at high levels, without having to show other documents.
The use of QR codes in accordance with national standards will also be used for other purposes, including public services, health examinations, non-cash payments and smart city services.

After one month of activation, 714,754 registrations have been made.