VietNamNet Bridge – Many investors who once rushed to pour money into hydropower projects are so deep in debt they are not sure when they will ever recover.

VietNamNet Bridge – Many investors who once rushed to pour money into hydropower projects are so deep in debt they are not sure when they will ever recover. 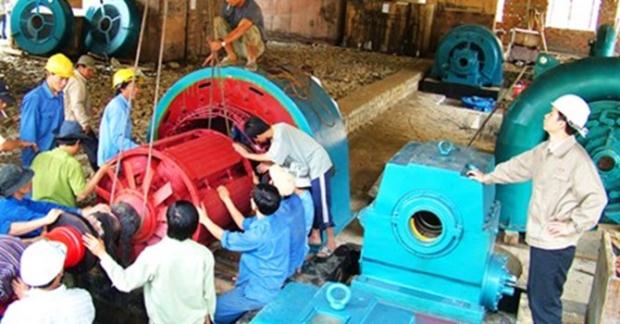 Dak Lak Province in the central region, for example,  is well known as having many small- and medium-sized hydropower plants, and the location of the first privately owned power plant that sold power to Electricity of Vietnam.

According to the province’s Industry and Trade Department, 14 small- and medium-sized hydropower plants with total capacity of 85 MW were put into operation from 2006 to June 2014.

The plants’ total investment capital was VND2.4 trillion. They provide 350 million kwh of electricity every year.

With the current wholesale electricity price of VND800 per kwh, the 14 plants have annual revenue of VND280 billion and provide one-third of the province’s electricity demand.

However, nine of the 14 plants are reportedly incurring losses with bank debts getting larger because of interest rate fluctuations and low wholesale electricity prices.

An official of the Industry and Trade Department said many investors, who are incurring huge losses, want to dissolve their businesses, but they cannot.

It is very difficult to find investors who want to buy the plants. And commercial banks, the creditors of these projects, are not receiving payments on the debts.

The plants were put into operation in 2008, 2010 and 2011, but income from electricity sales is not high enough to pay bank debts.

To date, Hoang Nguyen still cannot pay any of the principal on his loan. Tuan confirmed with Tien Phong’s reporters that it was nearly impossible to recover the investment capital, and that he fears the company may die but cannot be buried.

“Amateur” investors as well as ones with deep knowledge about the power sector have also lost their fortune in investments in the power plants.

Hong said that he had to borrow VND65 billion from a bank to develop the project capitalized at VND120 billion. The plant has earned VND82 billion since the first operation day in January 2009 and it has paid VND100 billion worth of loan interest to the bank. However, it still cannot pay the principal.

In the province of Gia Lai, a report from the State Bank of Vietnam showed that the bad debts of many hydropower projects had reached hundreds of billions of dong.

In Lam Dong Province, two of the 11 power plants providing electricity to the national grid, Da Kai and Dam Bon, are also reportedly in serious debt.

While the hydropower plants are on the verge of bankruptcy, the Ministry of Finance has issued a decision, described as “dealing another strong blow” to the dying enterprises.

Under the decision, small- and medium-sized hydropower plants will have to pay 4 percent instead of 2 percent in resources tax.