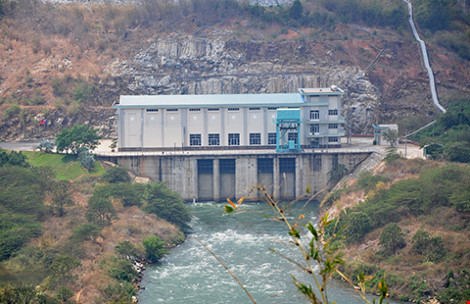 A report of the National Power Regulatory Center (A0) showed that 15 out of 51 hydropower plants had temporarily left the competitive power generation market by March 11.

The hydropower plants, including ones with large capacity such as Ham Thuan and Buon Tua Srah, have been running in moderation or have stopped generating electricity because of the serious drought. The water flow to the hydropower reservoirs in the central region and Central Highlands is very low, just equal to 35-40 percent of the previous years’ average capacity.

Hydropower plants have to prioritize to provide water to serve agricultualnproduction and people’s daily life in the downstream areas.

A report of the Dak Lak provincial Anti-drought Steering Committee showed that the water flow to the three water reservoirs in the first week of March was 19, 48 and 70 cubic meters per second, which is just enough for 2-4 month use.

“To ensure the water supply in the dry season, we have left the market since March 9,” said deputy director Tran Van Khanh.

Meanwhile, the situation was even more serious at A Vuong Hydropower Plant.

According to A Vuong Hydropower JSC in Quang Nam province, the volume of water stored in the 2015 flood season was low because of the El Nino effects. By the end of 2015, the water level at A Vuong reservoir had reached 357 meters, or 23 meters below the usual level.

However, A Vuong’s workers still have to work everyday, in case A0 urgently requests to generate electricity for the national grid.

In 2016, the hydropower plant has to generate 530 million kwh in 2016 as requested by the Ministry of Industry and Trade. Meanwhile, it had generated 3.9 million kwh only by March 10, fulfilling 0.7 percent of the plan.

Da Nhim and Ham Thuan hydropower plants run by Da Nhim-Ham Thuan-Da Mi JSC also had to withdraw from the electricity generation market to share water with the downriver areas as Binh Thuan province is one of the areas most seriously hit by the drought.