VietNamNet Bridge – The Director General of the International Atomic Energy Agency (IAEA) confirmed that the IAEA would support Vietnam in any way to successfully build the Ninh Thuan nuclear power plants in safety and sustainability.

VietNamNet Bridge – The Director General of the International Atomic Energy Agency (IAEA) confirmed that the IAEA would support Vietnam in any way to successfully build the Ninh Thuan nuclear power plants in safety and sustainability.

During his visit to Vietnam from 7-11/1, Yukiya Amano talked with the press on the morning of January 8 on the role of nuclear power, the tendency in the world, and he also brought advice for Vietnam in this field. 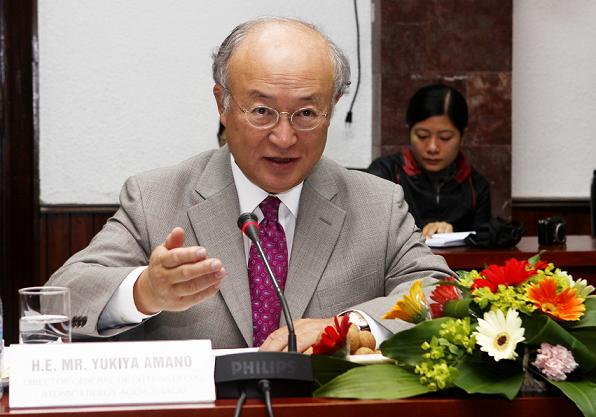 - What is your opinion about the future of nuclear power?

After the Fukushima accident, the confidence of the international community with nuclear power reduced a lot. The clearest evidence is Germany's decision to terminate nuclear power before schedule. Many people also thought that there is no future for nuclear power. But now it is very different. Many countries still have faith in nuclear power to ensure energy security, because it has many advantages, such as not producing greenhouse gases; the product costs are unchanged compared with fossil fuels, and providing stable power source.

According to IAEA’s forecast, under the baseline scenario, by 2030, nuclear power will grow at least 17 percent and up to 94 percent under the high scenario. So after Fukushima, many countries around the world have focused on nuclear power. I visited Russia, South Africa and found that at the nuclear power plants there, the test of resistance to serious accidents have been more interested. It can be said that nuclear power plants are much safer than the period before the incident in Japan.

- Vietnam is about to build two nuclear power plants in Ninh Thuan, but it has no experience in this area that makes many people worry. What advice does IAEA offer to Vietnam?

- Currently in the world there are about 30 countries using nuclear power and a number of other countries also want to develop this area.

In my opinion, not only Vietnam but many countries in the world have developed nuclear power without any experience. We are always ready to support and help countries develop nuclear power in safety, security and sustainability. IAEA has launched the guide with 19 categories for countries’ reference at the start of the construction of nuclear power plants.

Recently, Vietnam has made progress in this field, such as the feasible reporting. However, I reaffirm that there are a lot of works to be done to be successful in nuclear power. So one of the goals in coming to Vietnam this time, is how to further strengthen cooperation between Vietnam and the IAEA in nuclear development. I also received firm commitments from Vietnamese leaders on this issue. I myself confirm that we will do everything to help Vietnam successful carry out the Ninh Thuan nuclear power plant project.

- Specifically, how will the IAEA help Vietnam?

- IAEA will send missions consisting of leading experts to Vietnam at the request of Vietnam to discuss issues such as infrastructure, safety and other related issues related to nuclear energy. Since then, IAEA will know what Vietnam needs and Vietnam can learn experience from international experts in the development of nuclear power.

In addition, the IAEA also supports Vietnam through technical cooperation projects. In the period 2012-2013, the IAEA budget for these projects is approximately Eur1 million, including infrastructure development, nuclear power safety projects. The IAEA also supports Vietnam through nuclear power projects such as upgrading the laboratory systems or the project on management of food quality for export.

- For a country without experience of nuclear power like Vietnam, how long does it need to prepare the infrastructure for the construction of the first nuclear power plants?

Time is not the main problem, but how to prepare it carefully. Therefore, Vietnam should not hurry, because this is a big project with a country without experience in nuclear power development as Vietnam.