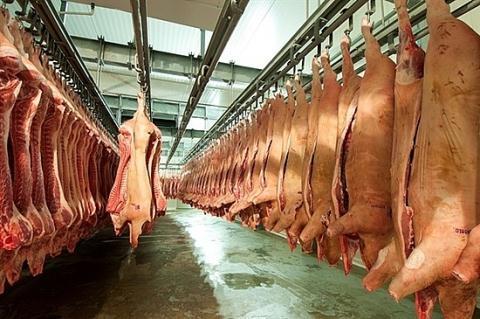 The import price was surprisingly lower than the domestic price, just VND30,000 per kilogram. The exporters are Brazil, the US, Poland, Belgium and the Netherlands.

The mass imports have increased the burden on Vietnamese farmers’ shoulders. They have had to struggle with African swine fever (ASF) which caused sales to drop dramatically, and compete with foreign imports.

“With such production cost, farmers find it very difficult to compete with imports,” Binh said.

Meanwhile, she has to spend millions of dong on bran every day.

“Meat processors tend to use import pork and don’t collect meat from farmers,” she explained.

According to Tran Van Chien, chair of Co Dong Service Cooperative in Hanoi, the ASF outbreak decreased the domestic supply, and farmers began sales of pigs too soon, creating a shortage.

Chien said the big gap in pork price is the most important cause.

Farmers understand that they cannot sell pork in large consignments to enterprises, but only in small quantities to merchants who will sell retail pork in traditional markets.

Brazil, the US, Belgium and the Netherlands can sell pork at low prices because the policies in their countries allow closed supply chains, with big preferences for farmers.

"To help Vietnam’s products become more competitive, the government needs to set up policies to support farmers,” he said.

Nguyen Kim Doan, deputy chair of the Dong Nai Livestock Association, fears that the massive imports will stifle farmers, affecting the domestic livestock industry. He said the government should restrict the import of pork and support domestic farmers by using domestically made meat.

Vietnam is seeking solutions to prevent pork supply shortage in the coming time as African swine fever continues to spread.