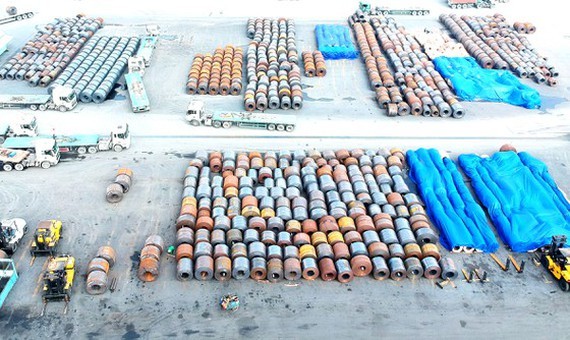 Risk of excess supply along with difficulties in export markets has made it possible for domestic steel industry to experience a cutthroat competition for market share right on the home ground.

‘In recent years, Chinese government has closed old and outdated furnaces to reduce excess production and protect the environment. However, nearly 70 percent of new furnaces will be put into operation between the middle of this year and next year with additional capacity of about 61 million tons of steel this year and 62 million tons of steel next year. Although production capacity has dropped, unlike old furnaces, newly-built furnaces are able to operate at full capacity, so there is possibility that actual steel production will be higher,’ said the representative of VSA.

By August this year, steel sales for automobile manufacturing industry of China had been unable to achieve its target for 14 consecutive months. Sales of equipment made from steel also declined drastically. Therefore, the excess steel source caused by increasing production has been flooding into Southeast Asia and some other places, causing downward pressure on Asian steel market.

At this time, one of Vietnamese largest steel manufacturers located in Ha Tinh Province has to consider about halting its expansion plan due to concerns that the current situation might urge cheap steel products from China to Vietnam, causing the price of this material to plummet.

According VSA, steel manufacturing capacity has exceeded the demand of all kinds of steel, especially cold-rolled steel, corrugated galvanized iron and color coated roofing sheets and stainless steel. Currently, export of cold-rolled stainless steel has been facing difficulties because there are many large manufacturers in Southeast Asia and regional supply has already exceeded market demand.

In addition, export of steel to the US and the EU markets also encountered difficulties due to anti-dumping tax.

Domestic steel market, especially stainless steel, has been seriously affected by the landing of Chinese products. Therefore, in the near future, enterprises should not invest more into cold-rolled stainless steel projects because it will create fierce competition among manufacturers and lessen investment efficiency, the representative of VSA emphasized.

VSA recently also proposed authorities not to grant permission for new stainless steel projects in Vietnam so as to avoid imbalance between supply and demand as well as trade dispute among countries as steel manufacturers in the region tend to move production abroad, including Vietnam. They even agreed to sell their production at a loss to win more orders and cover fixed operating costs.

At the same time, VSA also recommended that the Government should only allow foreign investors to participate in high quality alloy and steel manufacturing projects which domestic market is short of.

Hot-rolled steel in Vietnam is listed at US$500 per ton, down 10 percent over the previous year. The price will decline further if steel imported from China increases. This will cause competition between domestic steel and imported one to escalate. SGGP

China will have opportunities to export more hot rolled coil (HRC) products to Vietnam ad the products will be unaffected by import tariffs.

Escalating trade tensions and rising protectionism have caused a formidable pressure on Vietnamese steel sector, according to insiders.

Vietnamese companies filed complaints against Chinese steel products, accusing them of being sold at prices below the fair market value in Vietnam with dumping margin at 21.3%.