Inbound tourism not so busy despite peak season

VietNamNet Bridge – The peak season of inbound tourism has arrived, yet many tour operators have not recorded growths in international tourist arrivals.

VietNamNet Bridge – The peak season of inbound tourism has arrived, yet many tour operators have not recorded growths in international tourist arrivals. 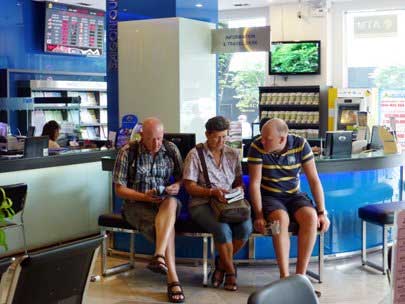 So far, only a few companies have obtained growths, while the others said the number of tourists is unchanged or has fallen compared to the same period last year.

The peak season of inbound tourism often begins in October and ends in April of the following year. This year, only the companies receiving tourists arriving on cruise ships or chartered flights like Saigontourist and Anh Duong have achieved growths of tens of percents, while other companies share the view that the market situation is not so bright.

Tu Quy Thanh, director of Lien Bang Travelink, said the number of foreign tourists at his company had dropped by 15% year-on-year, with no prospect of rebound in next year.

“Next year will only be more difficult as the economic situation is not favorable and service prices in Vietnam continue to rise,” he said.

Other companies like Vitours, Indochina Service Group and Asian Trails Co. Ltd. said that despite growths in some small markets, the number of international tourist arrivals is only equal to the year-ago period.

“We welcome around 3,000 German tourists every month, a normal number in the peak season. At present, we cannot give forecast for the market in the next season, but we have to wait for meetings with customers and big tourism fairs in early next year,” said Ung Phuong Dung, director of Indochina Service Group.

Although the total number of foreign tourists has grown 11%, many travel firms have recorded a decline in tourist numbers and have not made profits. They even have no orders for November and December, according to the Travel Department under the Vietnam National Administration of Tourism.

“The economic situations in many of the main visitor-generating markets for Vietnam are difficult, so we are very cautious with the plan for next year, pending the results of this month to draw up the plan,” said a source from the Travel Department.

In this inbound tourism season, hotel room rates in popular tourist destinations pick up 5-10%. A number of hotels are offering promotions to tour operators, but they are not as attractive as last year’s season.

Giving forecast for the business situation in the coming time, tour operators are worried that service prices and economic woes in the main source markets will lead to a decline in tourist numbers. Furthermore, they are worried over visa fee hike of almost 100% under Circular 190/2012/TT-BTC of the Ministry of Finance.

“Such a fee is too high compared to US$25 in Cambodia and US$20-30 in Thailand and Malaysia. Services in Vietnam are expensive. Now visa fee will soon increase, yet we have no promotion program for tourists, then how can we compete with neighboring countries?” Thanh of Lien Bang Travelink questioned.

According to the HCMC Department of Culture, Sports and Tourism, the city welcomed some 365,000 international tourists in November, up 14% year-on-year, taking the total foreign tourist arrivals in 11 months to nearly 3.47 million, up 12%.

Tourism generated around VND5.8 trillion in revenue this November, a rise of only 5% over the same period last year.

The number of Taiwanese tourists visiting Danang so far has been modest. They mainly come during the year-end season, and Danang tourism authorities are running promotions in Chinese-speaking markets.

“Last week, we accompanied the Vietnam National Administration of Tourism in a trip to Taiwan to work with the Taiwan Tourism Bureau in order to meet foreign partners and introduce the image of Danang to them,” said Cuong.

In the middle of this month, Danang, Quang Nam and Thua Thien-Hue jointly launched a tourism promotion program called “Three localities, one destination” in Shanghai, China.