Vietnam’s and India’s Coast Guards held a search and rescue drill off the coast of Ba Ria – Vung Tau on August 30 during the Indian SaRang 44 Samar -class offshore patrol vessel’s visit to Vietnam.

Vietnam’s and India’s Coast Guards held a search and rescue drill off the coast of Ba Ria – Vung Tau on August 30 during the Indian SaRang 44 Samar -class offshore patrol vessel’s visit to Vietnam. 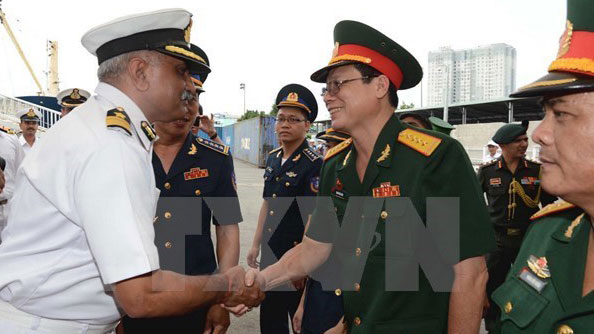 The hypothetical scenario presented the 450-tonnage transport ship M1 of Vietnam’s Z Transport Company with 17 crew members in flames with some sailors in the sea at 3 pm on August 30 at buoy area No 0, approximately 10 nautical miles from Vung Tau’s shore.

The ship had a high risk of explosion, presenting the potential for vast causalities.

After receiving the alert, Vietnam coast guard vessel 8001 (CSB8001) was deployed to the scene to implement search and rescue measures, approach and attempt to douse flames and save those at sea.

At the same time, the SaRang 44 coast guard vessel, which was sailing past the area, participated in the joint search and rescue coordination after receiving the distress signal.

After a smooth 30-minute operation, the burning M1 was put out and the crew members were rescued. After completing the search and rescue, the SaRang 44 vessel continued its course and the M1 was towed to Vung Tau port.

At the end of the drill, SaRang 44 Brigadier General Naresh Kumar Kaul said Vietnam’s coast guard was a seasoned force and fully capable of undertaking all search and rescue tasks at sea.

Vietnamese and Indian coast guards face similar maritime issues, such as pirates, rescues at sea and environmental protection, he added.

Colonel Nguyen Ngoc Lan said this is the first time Vietnamese and Indian coast guard have held a search and rescue drill at sea and that through the drill, both sides improved their leadership and search and rescue experience.

The two sides would coordinate in training staff and officers in search and rescue at sea as well as other legal enforcement tasks, said Lan.