Inflation in 2020: many unknowns

The General Statistics Office (GSO) reported that the consumer price index (CPI) in December 2019 increased by 1.4 percent over the month before. This was the month with the highest CPI growth rate in the last nine years. 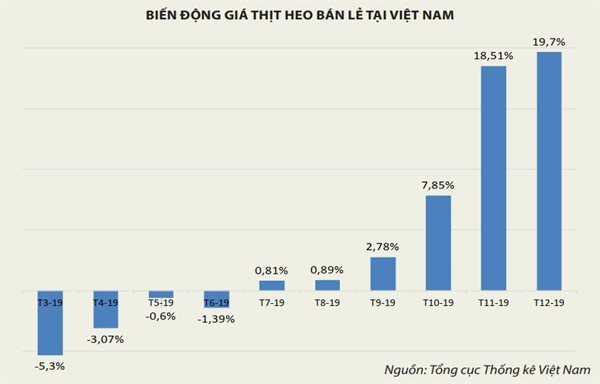 The average inflation rate of the whole year 2019 was 2.79 percent, much lower than the targeted level of 4 percent. However, the December’s year-on-year (YoY) inflation rate was very high, 5.23 percent. When analyzing macroeconomic indicators and the monetary markets, economists usually use YoY figures.

Prior to that, the YoY CPI exceeded the 5 percent threshold in January 2017.

Meanwhile, the demand for pork is believed to continue rising, especially in January 2020, when Vietnamese have Tet holiday and festival season.

Analysts believe that the food price will be increasing in 1-2 months and then decreasing gradually in the second and third quarters of 2020. However, they pointed out that there are many other factors that may push the CPI up.

First, the prices of petroleum products and other commodities are believed to increase all over the globe. As the US-China trade war has shown signs of cooling down, analysts believe that the global trade and economy will warm up.

Meanwhile, 2020 is the year when drought and heat will reach a peak as El-Nino has come back to Vietnam. If so, agricultural activities will face difficulties. Many areas in the north and south may not have water to serve agricultural production. Therefore, food and foodstuff prices may increase, especially rice.

Second, expectations about inflation. This was the factor that had the largest impact on inflation in the past. People tend to push the prices of goods and services up to new price levels. If so, the inflation rate may escalate.

Third, analysts see the high possibility of adjusting the prices of healthcare and education services, and electricity and water. If the prices of these essential goods and services increase, the prices of other goods will also be increasing.

A lot of pressure for Vietnam's inflation control in 2020

The fluctuating price of pork last year had significant impacts on the market, as the price plummeted in the first half of the year then soared in...

Comprehensive solutions needed to keep inflation in Vietnam below 4%: experts

The prices of multiple products and services are forecast to rise this year, putting pressure on inflation.