Le Cong Vinh is undeniably a superstar of Vietnamese football.

Winner of the golden ball in Vietnam three times, including a first at the age of 19, the youngest Vietnamese player to do so, with a host of other achievements such as being the leading goal scorer in V.League history, with 116, and recently being selected as one of five ASEAN legends, Le Cong Vinh is undeniably a superstar of Vietnamese football. 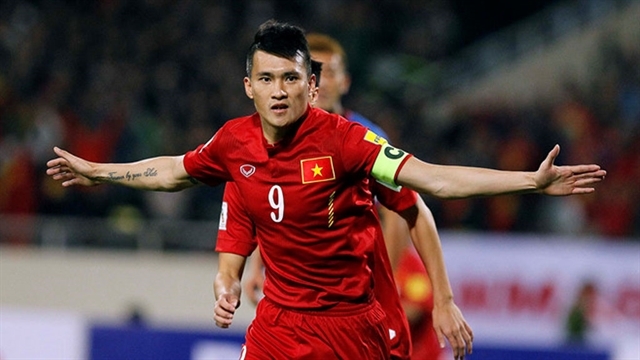 Despite having retired from football four years ago, his continued passion for the game is expressed in his community football academy and its desire to discover young talent around the country.

Viet Nam News reporter Hoang Ho spoke with Vinh about his academy, his many experiences in life, and his future plans.

How did the idea of opening an academy come about? Were there any difficulties and what drives you to continue with it?

Before opening the CV9 football academy in 2018, I studied other community football models that were in place in Japan and South Korea. So, with CV9, I hope to help young players from five to 17 years of age perfect their basic skills and to discover promising talent and send them to other professional football academies in Vietnam.

I haven’t faced any major difficulties as yet because I love to play with kids. Training with kids from the age of five to 10 is really exciting. When there are no classes, I miss them very much. So, with the development of the academy, I feel that what I’ve been doing so far has been meaningful and that this is the right thing to be doing with my life.

A player’s career can be full of glory one day and despair the next. You experienced the range of emotions during your career. Do you have any advice for younger players on being mentally strong?

I always tell them: “Here we are a family, we don’t distinguish who is better.

"We are a team and all of the young players are treated equally. The important thing is how we face defeat and also victory, as well as how we balance those emotions. First of all, a player must be a good person, as when we are good people we can achieve a lot of success. Our coaches here do not force players to play brilliantly, but it is important that they develop with age. Football is a sport through which we can experience many things."

As a celebrity and a role model for many players, what advice would you give them about the difficulties in striking a balance between playing football and being a celebrity?

Players should do everything because of passion. More importantly, though, football is a job. When we play good football, train well, and are dedicated to it, football can bring us a lot of great things, like money, fame, and, more importantly, a better life and the appreciation and respect of others.

Playing football is a privilege, and when we play good football we are loved by the media and fans. But when success doesn’t come, it’s normal to face criticism.

To succeed, you must know how to overcome pressure. Pressure is normal in this sport, not just in Vietnam but everywhere.

You need to ignore the negative news stories that can be written about you. Just do your job properly and responsibly, and if you haven’t succeeded just yet it’s because luck and opportunity haven’t come your way just yet. Always believe in yourself, that’s the important thing.

Will CV9 become a youth academy that provides the brightest talents not only for Vietnam but also perhaps for international clubs as well?

My academy has now provided many young players, from the U11 and U13 teams, to major academies. In the long term, CV9 will obviously uncover more talents and become one of the largest academies providing players for the national team.

You and your family conduct many charitable activities. What drives you to do this? Did being born into difficult circumstances make you empathetic with others in a similar situation?

Everything must come from the heart. More importantly, I have a wife who understands me very well and she wants to help people in difficult situations. I feel blessed to have her in my life.

The charity trips are her idea and I always give my full support. Whenever she wants to do charity work, I encourage her and go along with her. As long as she feels happy.

I think living in difficult circumstances can make us feel for those in a similar situation. My family and I also believe in Buddha and karma. Money is something we can’t take with us when we die. If we can bring a smile or happiness to others, we will be 1,000 times happier ourselves. So, after every charity trip, I want to do another, and if I can, I want to help more and more people.

Can you tell us about your future plans regarding work, family, and yourself?

Following my retirement, my new passion became golf and I’m still pursuing it. I never intended to play football again, because if I still had the necessary passion I would have played for a few more seasons instead of retiring at 31 when I was still fit.

I have a lot of plans relating to sport but I need time to ponder it all. I’m happy with what I have now and what I have done. I have more time for my family these days, and have more time to do what I like to do. I have my own football academy, where I can spend time playing and training with young players. Everyone at the academy is a friend, and we are all like a family. It is a source of happiness for me.

I will try to develop the CV9 Academy in the future and expand around the country. Next year my wife and I will try to have another child, so that our daughter can have a brother or a sister.

U19 footballers gather ahead of AFC U19 Championship finals