Dinh Vu Tung Lam, who was diagnosed as being in the autism spectrum, is now confident in his abilities and is continuing to nurture his love for mathematics. 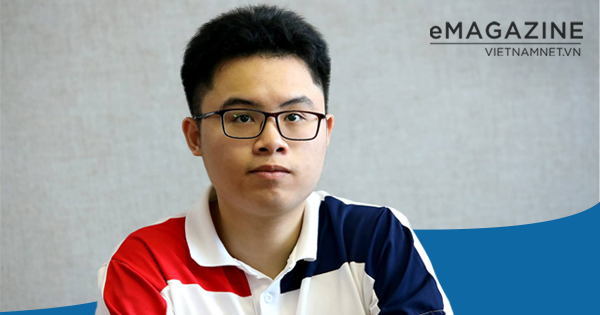 After winning the silver medal at IMO (International Mathematics Olympiad) 2021, Dinh Vu Tung Lam was admitted to the class for talented students in mathematics at the Hanoi University of Natural Sciences. Lam is beginning a new chapter in his life, spending more time on mathematics studies.

Dinh Vu Tung Lam is one of 14 people nominated by VietNamNet as Inspiring Characters 2021.

“I was not as fortunate as my peers. When I turned three years old, doctors said I suffered from autism spectrum disorder. I never sat still for a moment. I was naughty, unruly and destructive. And I had problems with my language and communication skills,” Lam recalled.

Lam found it difficult to make friends. No school would admit him until one day he was admitted by Le Quy Don School after the mother decided to go to school with Lam.

However, Lam was not happy at school. He wanted to play football with classmates, but no one wanted to admit him to their team.

Lam’s mother then thought of sending Lam to a specialized school, but she later changed her mind. Refusing attractive job offers from foreign companies, Yen the mother took a part time job so that she could spend more time with Lam. She participated in extracurricular activities, and took Lam for walks around streets.

Thanks to the parents’ great efforts, Lam gradually became better. He began doing math and was happy about it.

“When studying math, I feel as if I can live with it. And I gradually felt an interest in numbers,” Lam said.

The interest was so great that he solved all the math exercises in textbooks during the first week of the second grade.

Positive changes became more clear when Lam was in the fourth grade. He no longer made mistakes although his life skills were still poor and his communication skills were clumsy. But he began participating in many math competitions and became a well known name.

“I lived with the fear of being ridiculed. The achievements at competitions made me more self-confident and I felt safe when working with numbers,” Lam recalled.

“Math is a friend and a source of joy. But it is also an obsession,” he continued.

Last year when Lam attended IMO he was the only one who did not win a medal.

“It was a terrible time,” he recalled, saying that he cried a lot and doubted himself.

However, Lam says he is lucky as he is beloved by parents and people around him. So he vowed to continue his path.

When attending IMO again, his goal was solving difficult math questions, not receiving a medal.

“My rivals then were not the competitors, but the math questions,” Lam said

He won a silver medal and had the second highest score among Vietnamese contestants.

“I want to dedicate this medal to my mother. If I were not her son, everything would be extremely scary for me. I understand that behind my successes are my mother’s silent tears, patience and love,” he said.

With impressive achievements, Lam was admitted to the class for talented students in mathematics at the Hanoi University of Natural Sciences, a member of the Vietnam National University, Hanoi (VNU Hanoi).

“I still have a lot of things to learn. The environment at university is quite different from general school. In the past, I was passionate about math and I wanted to win competitions. But now I am studying math to find the beauty of math and apply math in practice,” he said.

Lam dreams of studying math in a famous school in Europe where many Fields medal winners have studied. He also wants to become a postgraduate in mathematics at a school in the US to continue discovering the beauty of math.

Lam believes that everyone has his or her own value and they just need to discover it and promote it. This will help them become more self-confident.