Main topics at the event were the outcomes of the convention, sea level rise and the relationship between UNCLOS and Sustainable Development Goal 14, which is to conserve and sustainably use the oceans, seas and marine resources for sustainable development.

Addressing the workshop, Under-Secretary-General for Legal Affairs and UN Legal Counsel, Miguel de Serpa Soares, emphasised that the ratification of the convention was a historic milestone of the consensus among nations to develop a comprehensive legal framework for activities at sea.

He also highlighted the major challenges relating to the implementation of the convention, such as conservation and sustainable use of the sea.

Countries should pay more attention to the rights of vulnerable people and those whose livelihoods depend on the ocean, and at the same time strengthen international cooperation, build capacity, improve ocean governance and attract the participation of small and less developed island states at sea forums, the diplomat said.

Prof. Nguyen Hong Thao, a member of the UN’s International Law Commission, spoke about the integrity of the 1982 UNCLOS in the face of "unforeseeable" issues when the convention was born, including sea level rise. According to the professor, it can be seen in reality that all countries seek to handle many of the ocean issues within the current legal framework provided for by UNCLOS, instead of building regulations outside the convention.

In his concluding speech at the end of the workshop, Ambassador Dang Hoang Giang, Head of the Permanent Delegation of Vietnam to the United Nations, who chaired the workshop, reaffirmed countries' commitment to the universal goals and principles set forth in the UNCLOS and expressed his wish to cooperate with other members to promote the convention's role in addressing common challenges, maintaining peace, stability, cooperation and sustainable development for the interests of present and future generations.

Vietnamese Ambassador Dang Hoang Giang underlined the historic significance of the 1982 United Nations Convention on the Law of the Sea (UNCLOS) to all humankind, while representing more than 40 member states of the UNCLOS Group of Friends at a meeting in New York on December 8.

The meeting of the 77th UN General Assembly session celebrated the 40th anniversary of the adoption and opening for signature of UNCLOS.

Co-chairing the meeting, Ambassador Giang, Permanent Representative of Vietnam to the UN, said UNCLOS holds historic significance to all humankind as it marks an important milestone in the development of international law of the sea in particular, and the orderly and sustainable use of the oceans in general.

More than 40 states from all continents and regional groups of the UN affirmed that UNCLOS is a globally recognised legal framework regulating all activities in the seas and oceans, which has been repeatedly emphasised in resolutions of the UN General Assembly.

They held that the convention is helpful in enhancing international peace, security, and stability, resolving disputes, and promoting sea-based activities, thereby fostering the development of each country and the entire international community, according to the diplomat.

He also stressed that the maintenance and fully implementation of UNCLOS is now more urgent than ever amid many long-term challenges, including sea disputes, transnational organised crimes at sea, resource exhaustion, and emerging maritime issues, including climate change impacts.

Given this, all countries have to comply with obligations under the convention. Their activities, including maritime claims and sea-based activities, must accord with UNCLOS to help conserve and sustainably use the oceans and marine resources, Giang went on.

All disputes need to be resolved by peaceful means with full respect for the mechanisms and legal processes stipulated in UNCLOS, the ambassador remarked.

Vietnamese Ambassador Dang Hoang Giang addresses the meeting on December 8. (Source: VNA)
On this occasion, he also affirmed that the UNCLOS Group of Friends stay steadfast in pursuing their original goals, especially improving the awareness and implementation of UNCLOS, promoting cooperation, identifying challenges, and working together to surmount those challenges.

In his speech, UN Secretary-General Guterres said the adoption of UNCLOS by most nations of the world 40 years ago was a “vital step to bring governance and order” to the vast collective treasure that is the ocean.

He held that the 40th anniversary should be “an important reminder to continue using this critical instrument to tackle today’s challenges.”

At the meeting, groups of states also highly valued the role of UNCLOS, perceiving that the adoption of the convention 40 years ago, for the first time, created a comprehensive legal framework for sea-related activities.

They also hailed enormous contributions by UNCLOS and the bodies established under this convention, including the International Tribunal for the Law of the Sea, the Commission on the Limits of the Continental Shelf, and the International Seabed Authority, to the maintenance of the order of the oceans, as well as the conservation and sustainable use of marine resources.

Int’l conference marks 40th anniversary of UNCLOS
An international conference was held in Hanoi on December 8 to mark 40 years since the adoption of the 1982 United Nations Convention on the Law of the Sea (UNCLOS). 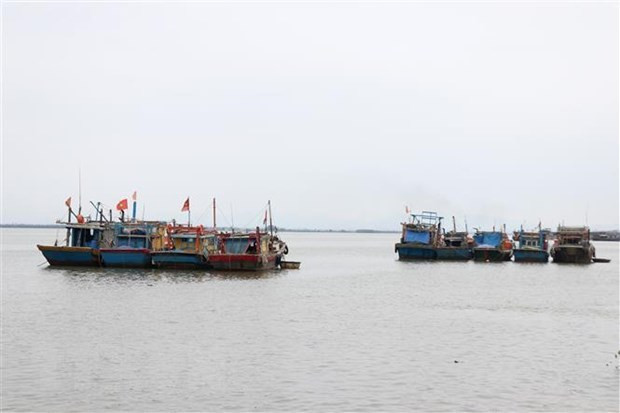 Fishing vessels of Quang Tri province (Photo: VNA)
The hybrid event, held by the Ministry of Foreign Affairs, was attended by 150 delegates from ministries, sectors, coastal localities, and representative bodies of ASEAN countries in Vietnam.

In his remarks, Deputy Foreign Minister Nguyen Minh Vu said having been ratified by 168 parties, UNCLOS has truly become a legal document of leading importance, only after the UN Charter, and a “constitution of the seas and oceans”.

The convention formed a comprehensive and full international legal framework that regulates the rights and obligations of all states, no matter whether it is coastal or landlocked, in the use of the seas and the management, exploitation, and conservation of marine resources, he noted.

UNCLOS is a comprehensive international legal cornerstone for identifying sea areas, sovereignty, sovereign right, and jurisdiction over sea areas, and for conducting activities at sea. It also stipulates compulsory dispute settlement mechanisms to peacefully resolve differences relevant to the interpretation and application of UNCLOS among countries, according to the official.

The conference held a panel session to highlight the special values of UNCLOS and another on Vietnam’s implementation of the convention.

In their remarks sent to the workshop, Tommy Koh, former President of the third UN Conference on the Law of the Sea, and Vladimir Jares, Director of the UN Division for Ocean Affairs and the Law of the Sea, stressed the importance of UNCLOS and Vietnam’s contributions to the UNCLOS drafting and implementation process.

Participants shared the view that over the past 40 years, UNCLOS has not only properly served as a constitution of the oceans but also contributed to the formation and protection of the international legal order of the seas and oceans, as well as to the maintenance of peace, security, stability, and international cooperation at sea.

They said that bordering the East Sea and being a member of UNCLOS, Vietnam has always been well aware of the role and importance of the seas to national peace, security, and development. They also affirmed the importance of respecting and fully and responsibly implementing regulations in UNCLOS, protecting the legal order of the seas and oceans, and promoting cooperation amid complex developments in the East Sea./. VNA