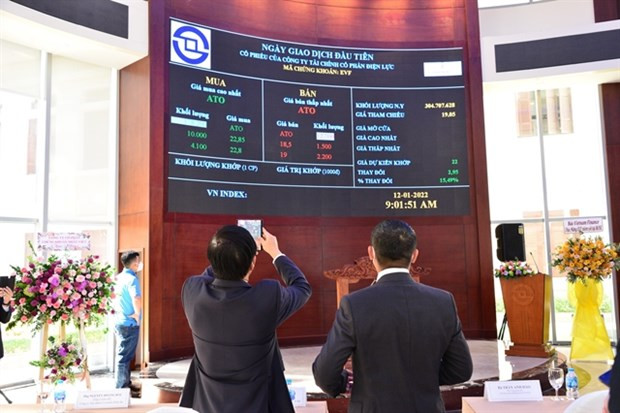 Investors at an IPO ceremony in HoSE's building earlier this year (Photo: VNA)

Amid uncertainties in the global and domestic markets, businesses and investors are more cautious in the second half of the year, Bui Van Trinh, Deputy General Director of Audit & Assurance Services at Deloitte Vietnam, told baodautu.vn.

In the first half of 2022, there were only six successful IPOs totalling 65.05 million USD. Ton Dong A, Nova, and Green were the three major agreements out of those. Deloitte Vietnam was waiting for some blockbuster IPO deals that were already planned, Trinh said.

Meanwhile, for more than ten months this year, Thailand and Indonesia topped the Southeast Asian region in terms of IPOs. Each country mobilised over 2 billion USD, accounting for 76% of the total mobilised money in the region.

Thailand saw the highest amount of IPO capital raised among exchanges in Southeast Asia, with a total of 2.5 billion USD raised through IPOs. Funds raised this year are on par with those raised between 2017 and 2019 (over 2 billion USD annually), which is a sign that things are back to pre-pandemic levels.

Notably, foreign investors, who were absent during the pandemic years, are returning to invest in the Thai stock market this year.

Earlier this year, experts predicted that the number of IPO listings would remain stable throughout Southeast Asia. But until now, the amount has halved compared to the previous year.

The region's IPO markets, in particular, are focused on smaller-scale listings. According to Deloitte data, to date, companies in the region have raised 6.3 billion USD from 136 IPOs, while they raised 13.3 billion USD from 152 IPOs during the same period in 2021.

Small businesses are more in need to raise capital amid the current challenging market, according to Deloitte experts. It is forecast that in 2023, the whole region will not see many massive IPO deals.

In the Vietnamese market, investors and consultants are paying attention to some deals. Typically, VinFast, a member of Vingroup, is considering an IPO in the US market in January 2023 at the earliest. The company can raise at least 1 billion USD from the IPO, but everything depends on the interest rate.

Currently, VinFast is negotiating with investors and reviewing the market situation to determine a specific IPO time. In April, VinFast filed for an IPO in the US.

Le Thi Thu Thuy, Vice Chairwoman of Vingroup and VinFast Global CEO, stated in November 2021 that when VinFast files for an IPO in the United States, it will only sell 5-10% of its shares. VinFast's value may reach 25 billion USD to 60 billion USD after the IPO.

In July, VinFast signed an agreement with banks to raise capital of at least 4 billion USD for an expansion plan in the US.

Two brands in the field of e-commerce and logistics, Tiki and Giaohangtietkiem JSC, also attracted interest from many foreign investors.

Specifically, Tiki plans to list in the US in 2025, but founder Tran Ngoc Thai Son wants to push this plan up by a year. A SPAC or a merger with a professional acquirer can be used for the IPO.

A successful IPO in the US can bring great benefits in terms of raising capital for the company. Tiki may open the door for more international investment in the developing Vietnamese technology sector if the IPO is a success.

Shinhan Financial Group became Tiki's third-largest shareholder in May after being a strategic partner in purchasing 10% of the company's shares, allowing Tiki to accelerate its US IPO plan.

Tiki successfully raised 258 million USD last November in an investment round led by AIA Insurance. The purpose was to expand the e-commerce market share, and serve the IPO plan in the future. Its former investors include Sumitomo Corp, JD.com and Northstar Group.

Meanwhile, Giaohangtietkiem is also aiming for a domestic IPO later this year or early in 2023 to raise capital and cope with increasing competition in the logistics industry. The delivery’s valuation is up to 1 billion USD.

Clearly, the COVID-19 pandemic has prompted many retail investors to participate in the stock market. Increases in interest rates can encourage many companies with a solid business foundation to seek listing, utilising the stock market to diversify and lower their investment sources./. VNS