It’s too early to prohibit motorbikes in Hanoi in 2025: experts

A number of experts are against Hanoi’s plan to prohibit motorbikes beginning in 2025, warning that proper conditions will not be ready to implement the plan. 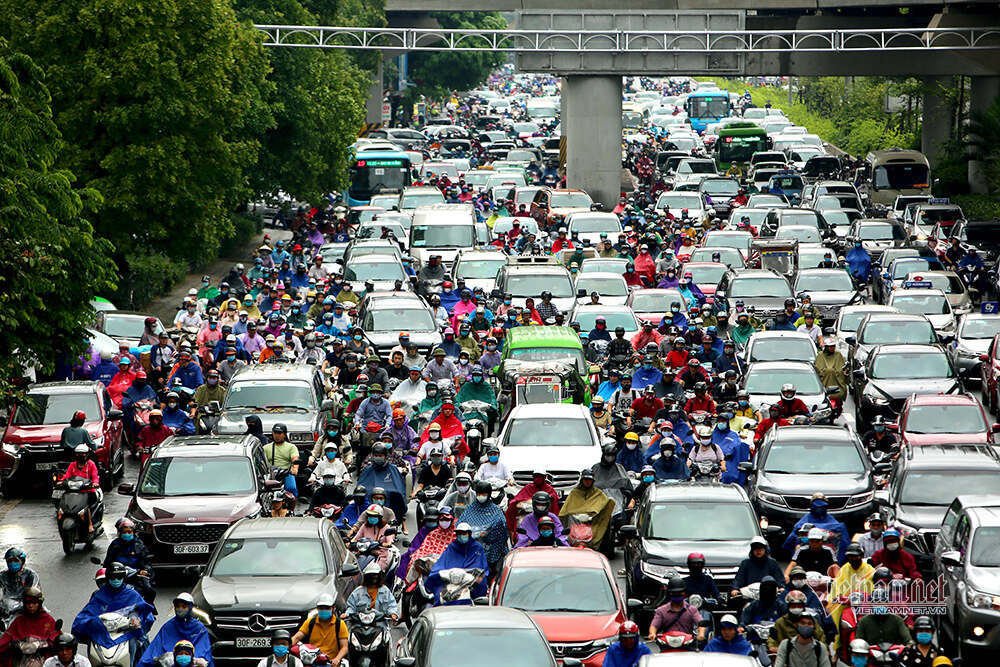 Bui Danh Lien, Deputy Chair of the Hanoi Transportation Association, said Hanoi began thinking of prohibiting motorbikes in inner districts a long time ago, but the plan didn’t get support from scientists, experts and people.

The prohibition was initially slated for 2030 but it was rescheduled to be implemented from 2025.

Lien said that Hanoi is strongly determined to prohibit motorbikes which is in line with the development of modern cities. However, with the current status of Hanoi’s public transport, the city will not have sufficient conditions to implement the plan.

Hanoi needs to answer a question, Lien said. Which means of transport will Hanoians use once motorbikes are prohibited?

There are 6.4 million registered vehicles in Hanoi, including 0.6 million cars and 5.6 million motorbikes.

Once motorbikes are prohibited, people will have to travel by bus. With limited land area in inner city, with no underground traffic, it’s difficult to bring buses into full play. It’s possible that traffic jams would be even more serious once Hanoi prohibits motorbikes.

“Previously, buses in Hanoi ran at the speed of 28 kilometers per hour, now 17 kilometers only. As a result, traffic becomes more congested and people don’t want to use the bus,” Lien said.

Besides buses, people can travel by urban railway. But in Hanoi, only the Cat Linh –Ha Dong route has been put into operation. It’s expected that one more route, from Nhon to Hanoi Station, will become operational by 2025. Other routes have not yet been implemented.

So, it would be too risky to rely only on the bus network and the two railway routes when prohibiting motorbikes from 2025.

Phan Le Binh, a transport expert, also noted that Hanoi doesn’t specify how people would travel if they cannot use motorbikes.

He believes that the prohibition can only be done on routes where there are urban railways. He warned that if Hanoi doesn’t consider all possible matters carefully, it will encourage people to shift to cars.

“The prohibition may prompt people to enter the inner city with private cars. If so, the plan to ease traffic congestion would fail,” Binh said.

Nguyen Xuan Thuy, an expert, said that public transport in Hanoi is poor, which is why 80-90 percent of people use private vehicles and 70 percent use motorbikes. The prohibition of motorbikes will make it difficult for people to travel and earn a living. Most people using motorbikes are not high income earners.

He said that infrastructure conditions in the capital city are poor and in such conditions, motorbikes cause fewer traffic jams than private cars.

He warned that if Hanoi prohibits motorbikes, the number of private cars will soar. One can buy a car now with VND200-300 million, and it’s estimated that 30 percent of motorbike users can buy cars.

Soon after the Cat Linh – Ha Dong railway opened, many people decided to take the train every day. It would be better to compete to attract people to use public transport rather than prohibit them from motorbike use.

Hanoi plans to prohibit motorbikes from 2025 but how many tramcar routes will Hanoi have by that time and how many people will be using public transport?

He said Hanoi should only think of restricting private vehicles if at least 40 percent of people use public transport. The current figure is less than 20 percent.

In other countries, once public transport satisfies 50-60 percent of travel demand, private motorbikes and cars are restricted, not prohibited.

The first smart electric buses in Vietnam that use eco-friendly energy were officially put into operation in Hanoi on Thursday.

Hanoi to collect up to VND60,000 from cars entering inner city

Owners of cars with under nine seats entering the inner city area on ordinary days would pay tolls between VND25,000 and VND60,000.