World and Asian defending champions Japan on September 29 stopped Vietnam’s unbeaten streak at the ongoing Asian Games (ASIAD 17) in the Republic of Korea, outplaying their female rivals 3-0 and cruising to the final match.

World and Asian defending champions Japan on September 29 stopped Vietnam’s unbeaten streak at the ongoing Asian Games (ASIAD 17) in the Republic of Korea, outplaying their female rivals 3-0 and cruising to the final match. 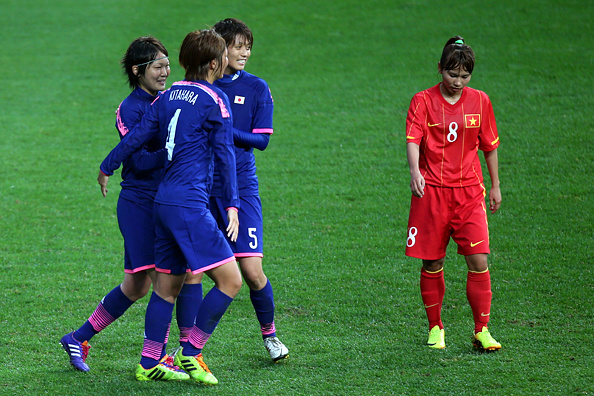 Vietnamese underdogs, who made their Asian games history by qualifying for the semi-final match for the first time, looked very comfortable. They were under no pressure encountering stronger Japanese girls who have stunned them four times since 2006.

Takase Megumi hammered home on 21 minutes after Vietnamese goalkeeper Kieu Trinh failed to save the ball, but the referee overruled Takase’s goal as she was scoring in the offside position.

Vietnamese players made low drives, but they were all blocked by Japanese midfielders.

Eight minutes into the second half, Osafune Kana struck the second for Japan with a header.

Despite their 2-0 lead, Japan continued with their offensive tactics, making it impossible for Vietnam to get a chance.

SugasawaYuika added the third with a diving header on 73 minutes, completing a wonderful day for Japan.

Goalie Kieu Trinh was later tested by Japanese girls, however, she tried to defend the net in the last minutes.

With the loss, Vietnam will play for a third place with the winners of the encounter between the two Koreas.