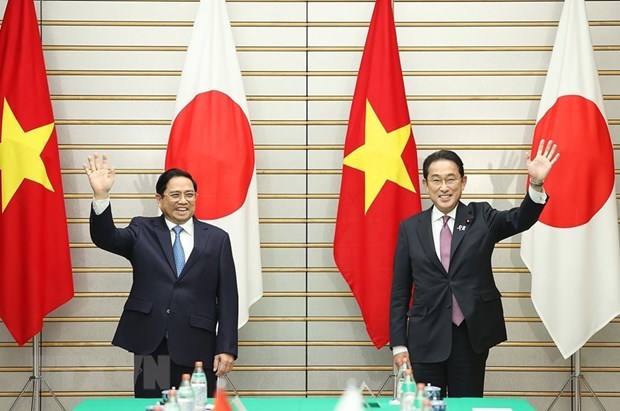 He cited the project on building a waste-to-energy plant in the northern province of Bac Ninh implemented by T&J Green Energy Company Limited as an outstanding example for this cooperation.

According to the diplomat, under the Joint Crediting Mechanism (JCM) between the two countries, the Japanese Government will assist Vietnam’s purchase of equipment with Japanese advanced technology, thus contributing to the zero carbon economy in Vietnam. Currently, there are 40 approved JCM projects in Vietnam and in the coming time, Japan will continue to promote cooperation under this model.

The ambassador noted that within the framework of Prime Minister Pham Minh Chinh's visit to Japan in November 2021, Vietnamese Minister of Natural Resources and Environment Tran Hong Ha and Japanese Minister of the Environment Yamaguchi Tsuyoshi signed a cooperation plan on climate change response towards the target of carbon neutrality by 2050.

Commenting on Vietnam's efforts to pursue a "green economy", towards green, clean and sustainable growth, Ambassador Yamada suggested that in the coming time, Vietnam needs to continue concretising the circular economy and sustainable development based on the amended 2020 Law on Environmental Protection, which took effect from January this year. He added that Vietnam should also draft more ideas to materialise the zero-carbon society.

He noted that PM Chinh was the first foreign politician that Prime Minister Kishida Fumio welcomed after taking office, which demonstrated that Japan attaches importance to its bilateral relations with Vietnam. He affirmed that Vietnam is an important partner of Japan with shared strategic interests in the region to realise the goal of a free and open Indo-Pacific.

The diplomat said PM Kishida, once in his capacity as Secretary-General and advisor of the Japan – Vietnam Parliamentary Friendship Association as well as Foreign Minister for years, had always reserved special sentiments for Vietnam and worked to promote bilateral ties. Meanwhile, PM Chinh, who used to be Chairman of the Vietnam – Japan Parliamentary Friendship Group, has deep understanding about the Vietnam-Japan relations. PM Chinh’s Japan visit was a chance for the two leaders to deepen their trustful relations as the PMs of Vietnam and Japan.

According to the ambassador, 2021 was a year full of difficulties and challenges for the world, including Japan and Vietnam, as the COVID-19 pandemic continued to spread with dangerous new variants. He said the pandemic was a test of the true values of the two countries’ relationship. However, through PM Chinh's visit to Japan, it can be seen that the process of developing and deepening bilateral relations has always been maintained.

For 2022, Ambassador Yamada expressed his belief that the bilateral cooperation will continue to develop steadily, based on the orientations set by the two PMs’ Joint Statement.

He hoped that in 2023, when the two countries will mark the 50th founding anniversary of their diplomatic ties (September 21, 1973-2023), Japan and Vietnam will look back at the past half-a-century journey and continue to develop bilateral cooperation more extensively and deeply, thus opening up a new period in their strategic partnership.

Two Japanese have been appointed as Honourary Consuls General of Vietnam in Nagoya and Mie cities who pledged to do their utmost to developing Vietnam and its ties with Japan.