In May, 1957, President Ho Chi Minh visited a military training session at Da Chong Hill on the Da River. He stopped for lunch on the hilltop, where three sharp rocks pointed toward the sky. Approving the cool climate, terrain, and scenery, the President suggested this location be the provisional base of the government. 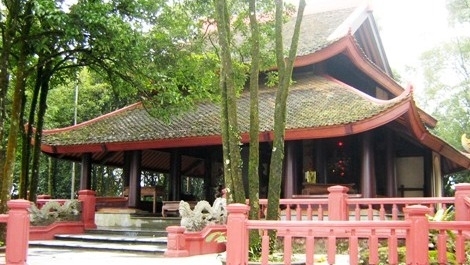 Luu Thi Thuy Nga, a tour guide of the site, told VOV, “President Ho Chi Minh chose the direction, erected the pillars, and modified the design himself. He replaced the hinged doors with sliding doors to make the meeting room airier. The corridor was enlarged to match the width of the house and stairs, making it easier to receive guests. The corridor was large enough for host and guest to walk side by side while talking.”

The K9 site served as a workplace for President Ho Chi Minh, the Politburo, and the Party Central Committee numerous times between 1960 and 1969. Here, President Ho once hosted the spouse of China’s Premier Zhou Enlai, a Chinese Ambassador to Vietnam, and a Soviet Union military delegation led by cosmonaut hero Gherman Titov.

When President Ho Chi Minh passed away on September 2, 1969, his body was kept for a time at K9, where the government installed equipment to preserve the body, overseen by a joint Soviet Union–Vietnam committee. Annual memorial services were held for Ho Chi Minh at K9 from 1969 to 1975. In July, 1975, a convoy carried his body from K9 to a mausoleum overlooking Ba Dinh square in Hanoi.

In 1995, an altar for President Ho Chi Minh was installed at K9, which often receives large crowds, who come to pay tribute to President Ho and attend political events. A memorial house was inaugurated here on September 2, 2015 to promote the great leader’s moral example and ideology, which are deemed vital to Vietnam’s national construction and defense.

“The altar is positioned at the center of the memorial house. On the altar is the President’s bronze statue and behind it is the national flag and a carved quotation from his teaching. There are a pair of parallel sentences, which say that Vietnamese spirit and wisdom, which President Ho vividly embodied, shine from here throughout the Vietnamese sky”, Nga added.

Le Quoc Bao, a university student from Hanoi, said he was very grateful to President Ho Chi Minh for his enormous sacrifice for Vietnam. As a young man, he's inspired to study and work harder to contribute to Vietnam’s development.

The K9 relic site has been preserved and repeatedly upgraded for six decades. It welcomes a steadily increasing number of visitors. Tributes to President Ho Chi Minh at K9 demonstrate the Vietnamese tradition of “Drinking the water, remember the source.”

Stunning view of Phu Quoc island from above

Located in Phu Quoc district, Kien Giang province, Phu Quoc island is the largest tourist island in Vietnam. Dubbed as a pearl of the country’s southwest sea, Phu Quoc is popular amongst both domestic and international visitors.