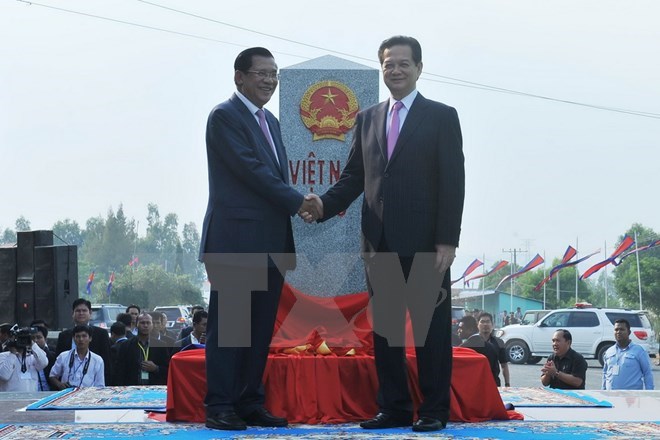 Vietnam and Cambodia jointly held a ceremony on December 26 morning in Duc Co district of the Central Highlands province of Gia Lai to inaugurate their border marker No.30 and the road connecting two checkpoints of the Le Thanh-O Za Dao international border gate.

Prime Minister Nguyen Tan Dung and his Cambodian counterpart Hun Sen attended the ceremony, marking the third time of their presence at such the event, and reflecting the two Governments’ determination and efforts to enforce their reached treaties and agreements on territorial boundary.

Speaking at the event, PM Dung affirmed that over the past years, the relations between Vietnam and Cambodia have grown continuously in line with the motto of “good neighbourliness, traditional friendship, and comprehensive and sustainable cooperation”.

“The inauguration of marker No.30 and the road connecting two checkpoints of the Le Thanh-O Za Dao international border gate, together with the inauguration of marker No.275 in the afternoon mark the Vietnam-Cambodia Joint Committee on Land Border Demarcation and Marker Planting’s completion of defining and building all key markers at 10 international border gate pairs along the two countries’ borderline, and its nearly 90 percent completion of border delimitation and border marker planting along the joint borderline,” Dung said.

The event is of significance as it shows the determination of the two countries’ leaders and people to soon finish the work and build a borderline of peace, friendship, cooperation and sustainable development, he stressed

It will also help facilitate border management and cooperation in all fields, particularly economics, trade, investment and tourism between Gia Lai and Rattanakiri provinces and the two countries at large, he added.

Acknowledging that the two countries have many things to do to complete all the important work, PM Dung asked PM Hun Sen to together direct the joint committee to continue efforts and close coordination to address existing matters towards the early completion of land border delimitation and marker planting and well control the border situation in order to build a boundary of peace, stability, cooperation and sustainable development.

For his part, PM Hun Sen affirmed that “today’s remarkable historical achievement will contribute to turning a clearly defined border area of the two countries into a region of peace, friendship, comprehensive cooperation and development, thus serving the two peoples’ peaceful and prosperous lives.

The inauguration of border markers over the past years has confirmed the nations’ efforts to carry out measures synchronously to handle border-related issues as soon as possible.

He reaffirmed that the Cambodian Government is consistent in maintaining its stance of building the shared borderline between Cambodia and Vietnam into a clear and concrete borderline on the basis of national and international law.

It will do its utmost to, together with the Vietnamese Government, turn the borderline on maps into border markers in the fields, he added.

The Cambodian leader continued to say that connectivity is a priority in the nations’ policies to intensify cooperation and integration, mainly within the cooperation framework of the Greater Mekong Sub-region (GMS), the Association of Southeast Asian Nations (ASEAN) and the ASEAN Economic Community which comes into effect since 2016.

Another border marker between Vietnam and Cambodia inaugurated

Prime Minister Nguyen Tan Dung and his Cambodian counterpart Hun Sen attended an inaugural ceremony of border marker No.275 in the southern province of An Giang’s Tinh Bien district on December 26.

Earlier on the same day, the two leaders participated in a similar event to inaugurate border marker No.30 and the road connecting two checkpoints of the Le Thanh-O Za Dao international border gate in Duc Co district in the Central Highlands province of Gia Lai.

The inauguration of the two border markers is of significance as it affirms the soundness of the nations’ border demarcation and marker planting as well as their leaders and people’s determination to complete the work soon, thus contributing to consolidating and enhancing the bilateral time-honoured friendship.

Vietnam and Cambodia share a borderline of 1,137km, which goes through 10 Vietnamese provinces and nine provinces of Cambodia.

Marker No. 275 is planted at the Tinh Bien – Phnom Den international border gate in Xuan To commune, Tinh Bien district.

The Deputy FM said the event continued affirming the soundness of the two countries’ ongoing border demarcation and border marker planting. It also illustrated their determination to expeditiously complete the work so as to define an accurate and fair borderline in accordance with their respective laws and international law and practice.

The Le Thanh-O Yadav border gates are positioned on an artery road linking Vietnam’s Central Highlands provinces with Cambodia’s northwestern region. The inauguration of the road between the checkpoints at the border gates will smooth the path for tourism and trade-investment activities between the countries as well as among ASEAN and Greater Mekong sub-region member nations.

The official added that the new facilities will help with the border management, exchanges, cooperation and mutual assistance in all spheres between the two nations.

He noted border demarcation and border marker planting is a bilateral work that requires active, sincere and straightforward efforts and cooperation of both sides, adding that outstanding border issues should be solved through peaceful negotiations and measures in line with international law and practice.

Deputy FM Trung stressed that much remains to be done to early complete the border demarcation and marker planting on the basis of the 1985 Treaty on the border delimitation, the supplementary treaty to the 1985 Treaty, and other related bilateral agreements.

Trung said the countries’ authorised forces should continue to make endeavours and closely collaborate to address unsolved problems and well manage border order and security in accordance with the 1983 agreement on border regulations and the 1995 joint press communiqué.

The full completion of the border demarcation and marker planting will also help settle other issues related to territory and land border, creating a foundation for solidified cooperation, the Deputy Minister stressed.