KorCham, the association of South Korean enterprises in Vietnam, estimates that about three South Korean businesses are inaugurated each day in Vietnam.

SK Group has announced a $1 billion investment in VinGroup to acquire 6.1 percent of shares of the Vietnam's biggest. conglomerate. 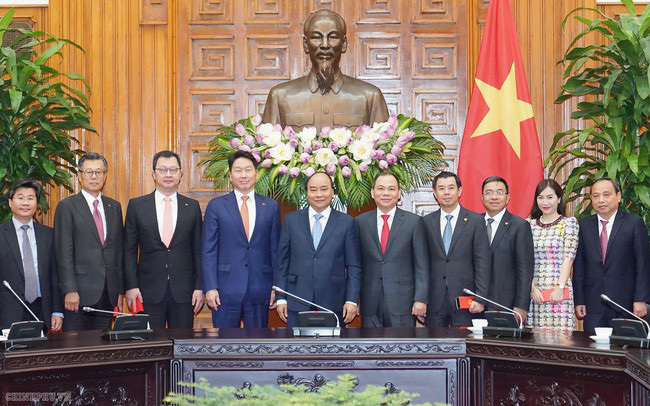 In 2018, SK Group made a $500 million investment into Massan Group. The South Korean corporation has set up SK Southeast Asia Investment.

SK Group cooperates with famous brands in Vietnam, and is different from that of Samsung and LG, according to Nikkei Asia Review.

However, PM Nguyen Xuan Phuc, thinks SK Group has made the right choice. Phuc, at a recent meeting with SK Group leaders said he hoped SK group and Vingroup will succeed in their cooperation, and that the government will protect the legitimate rights of foreign investors.

South Korean investment in recent days includes LG’s plan to relocate the high-end smartphone production line from South Korea to Hai Phong. Analysts say that LG’s move aims to take full advantage of the cheap labor cost in Vietnam which is just 1/8 of that in South Korea.

Samsung has been expanding its production scale in Vietnam, turning Vietnam into the conglomerate’s strategic productiono base.

It has moved ahead with the plan to build an R&D center in Hanoi, which will employ 3,000 workers and become the biggest R&D center in Southeast Asia.

Analysts say that in the context of the escalating trade war, investment flows have redirected, looking for new shelters.

Meanwhile, Vietnam has emerged as an attractive and potential destination for large corporations, including South Korean chaebols.

The first investment wave from Korea began with labor intensive projects in the textile & garment and footwear industry. The second mostly targeted the electronics manufacturing industry.

At this time, Vietnam is receiving the third investment wave which focuses on consumer goods manufacturing and retailing. In the near future, analysts say, the fourth investment wave may target the finance & banking sector.

On June 21, during a working visit to South Korea, Deputy PM Vuong Dinh Hue for the first time visited and had working sessions with KOFIA, the South Korean Financial Association, paving the way for investment opportunities for enterprises of the two countries.

At present, 16 finance companies, which are members of KOFIA, operate in Vietnam.

In the midst of the US-China trade war and the unexpected minus growth rate of the economy in Q1 2019, South Korean chaebols are looking for growth by penetrating emerging markets.