Few may be able to recognise that the works of artist Trinh Tuan are son mai (lacquer), because they appear very modern and don’t look how most people believe lacquer paintings should look.

Tuan, a native of Hanoi, will have his second solo exhibition on December 4 at the Vietnam University of Fine Arts’ Art Space in the city, with 25 paintings he created within ten years. 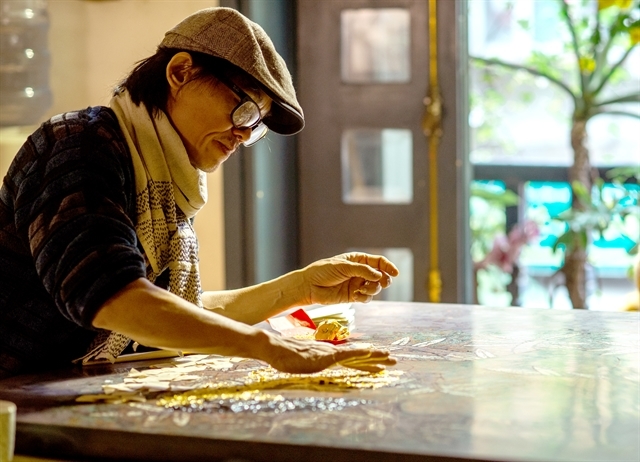 In a small room upstairs on Ly Quoc Su Street, he busies himself with the final polishing process for a large piece measuring 180cm by 180cm.

“I want to recall old Hanoi and the natural beauty of Sword Lake and West Lake,” he said. “I also depict old street corners and the spaces that give Hanoi its charm.”

Recently created works reveal his experience working with lacquer and his aesthetic concepts after nearly 30 years of working with the traditional material.

Hanoi Dem Day Sao (Starry Night in Hanoi), 160cm by 240cm, is one such piece, which Tuan created last year.

It holds a mysterious beauty, with dark tones featuring a young girl standing in front of Hanoi Cathedral.

The image of the girl standing alone under a starry night may remind viewers of their dating days in the city of the past.

Noi Nho Mua Dong (Winter Nostalgia), measuring 180cm by 180cm, depicts a girl standing next to a spindly tree at Sword Lake. He uses jade to paint the girl, in the style of master artist Gustav Klimt.

“I feel an empathy with Klimt,” Tuan said. “The space and colours in his works are a little bit like lacquer paintings.”

His design studies give his paintings a unique graphic and a Klimt style expressing feelings of loneliness and sadness or happiness and love.

Born in 1961 in Hanoi, he completed his bachelor of arts at the Hanoi Industrial College of Fine Arts in 1985 and his masters at the Vietnam University of Fine Arts in 2000.

He has worked at the Hanoi college as a teacher since 1985. As with many other artists, he trialled different types of fine arts until 1995.

He then met lacquer craftsman Dang Ngoc Bach and learned the necessary techniques. Bach was from the traditional Dinh Bang lacquer village in the northern province of Bac Ninh and was an assistant to renowned Vietnamese artists such as Nguyen Gia Tri and Nguyen Sang.

Historically, lacquer was once considered only an incidental craft. But with important modern masters producing works, the medium is now regarded as important for future generations of artists.

Lacquer provided artists whose careers began in the 1990s, like Tuan, with a new set of aesthetic and pictorial challenges.

About 20 years ago, only five basic colours were used, with black, red, gold, and yellow being limited by the use of white.

While oil paintings remain the most popular form of contemporary Vietnamese fine arts for the vast majority of collectors, lacquer works have established themselves as among the most innovative and representative of national heritage.

In the initial stages of creating a lacquer artwork, Tuan makes a distinction in colour schemes and doesn’t rely on the rules of traditional techniques yet still follows the basic principles.

He is considered an artist that makes a quiet contribution to preserving the art of lacquer, according to artist Luong Xuan Doan, chairman of the Vietnam Fine Arts Association.

“He has made breakthroughs in colours and graphics in lacquer paintings, making them appear modern,” Doan said.

“They have a strong visual impact, which is very much different from traditional colours.

“The modernity in his creativity has helped develop lacquer art works.”

Unlike many other artists who have stuck to the more conservative approaches found within tradition, Tuan uses colours and themes he himself has explored.

He has had the chance to share experience with artists from Japan, South Korea and China, and found that their lacquer colours have been modernised.

“They have many materials in different colours,” he said. “We buy and mix them with traditional materials to create. I think the world is flat and my way is integration.”

His first solo exhibition was in 1999, held by the Nam Son Gallery, one of Vietnam’s most prestigious at the time.

Though having held many solo and group exhibitions in countries such as Thailand, Japan, the US, Germany, Italy, Denmark and France, it has been 20 years since his first and only solo exhibition in Vietnam.

This upcoming exhibition will reveal his experimentation and be a nice surprise, according to association chairman Doan.

The folk painting exhibition will last until December 20.