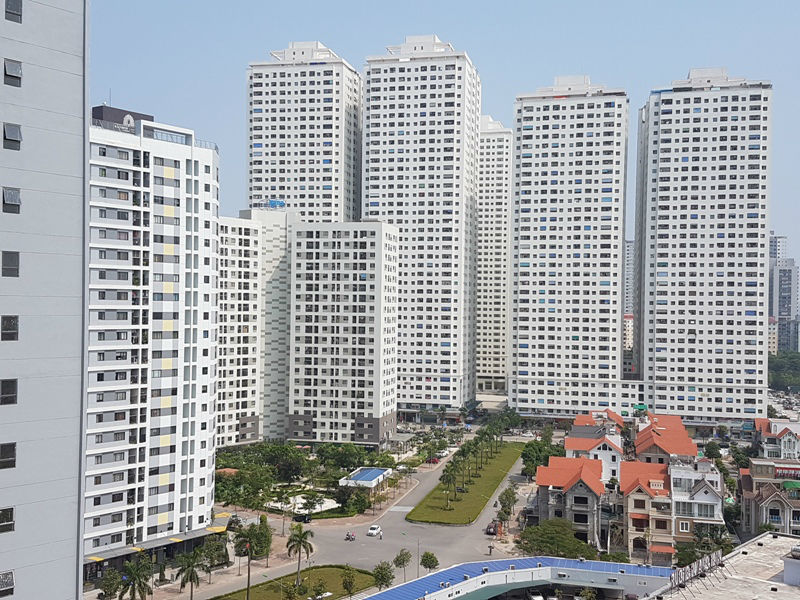 The Ministry of Construction’s (MOC) Q1 report on the real estate market showed that there were nearly 25,400 successful transactions in the quarter, a sharp decrease of 86 percent compared with Q4 2020.

These transactions were mostly seen in affordable market segment, while the transactions of high-end products decreased significantly.

Though the number of transactions in some market segments has decreased, prices remained high despite the Covid-19 pandemic.

Commenting about the land fever, MOC said the land prices increased for a short time before going down, and the increases were seen in only some localities.

Though land fever has subsided, the apartment prices keep increasing monthly, by 5-10 percent on average compared with the fourth quarter in 2020.

In HCM City, a price increase of 4.6 percent has been reported for Feliz En Vista, 5.2 percent for The Metropole Thu Thiem, 6.1 percent for Waste Gate Park, and 5 percent for Dat Gia Residence Thu Duc.

In Binh Duong province, the prices in some recent transactions were higher by 4-5 percent at Bcons Suoi Tien, The East Gate and Compass One, compared with the fourth quarter of 2020.

Analysts note that there are very few affordable apartments (less than VND25 million per square meter) for buyers. These products are only available in areas far from the city center.

Even these low-cost products have also seen prices rising from VND20 million per square meter to VND25 million.

As for mid-end apartments, the products in newly developed projects in Hanoi have selling prices of between VND30 million and VND40 million, mostly in the districts of Ha Dong, Thanh Xuan, Cau Giay and Gia Lam.

In HCM City, mid-end apartments are more expensive than in Hanoi, with prices of VND35-45 million per square meter.

New price levels have been set up for high-end apartments in Hanoi and HCM City. The products with high quality and luxury equipment are very pricey. At The Nine – Pham Van Dong, apartments are selling at VND50 million per square meter.

In last March, the Vietnamese realtors’ community was stirred up by the news that a project in HCM City was introduced to Hong Kong’s investors at the new price peak of $18,000 per square meter, or VND423 million.

Also in late March 2021, an apartment project on Ton Duc Thang street, one of the backbone routes along Sai Gon River, reported successful transactions at $18,000 per square meter, which set a new record in Q1 2021.

High-end and super-luxury apartment prices are moving up and new peaks have occurred. The products have the starting price of $16,000 per square meters.

MOC said that apartment prices in both Hanoi and HCM City are rising because of a supply shortage.

As for social housing projects, there were only two projects with 595 apartments that received new licenses in 54 out of 63 cities/provinces which submitted reports to the ministry.