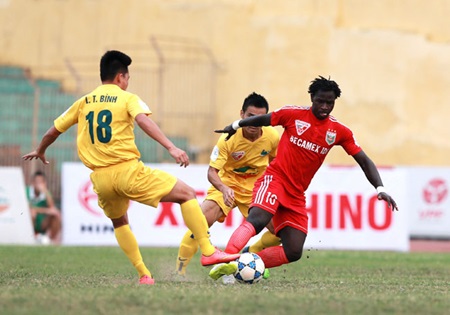 Thanh Hoa midfielder Le Duc Tuan, in an attempt to block a ball, created an opener at the 58th minute.
Tough his header was not difficult, startled goalkeeper To Vinh Loi acted too late to save his net.

Just two minutes later, Tuan found a chance to level the score for the hosts, when he was faulted in the box.
However, teammate Sy Cuong then kicked above the cross-bar.

Despite playing against an all-star team, Thanh Hoa played better, though with many missed chances to score, especially when Le Van Tan faced Binh Duong's keeper Esele Quoc Thien in the penalty area in the second half.
Yet the hosts' effort brought sweet results during the additional time, though many of their fans had already departed the stadium.

Substitute Patrick de Silva went on to steal the limelight with a straight closed shot to level the score.
The draw did not change Binh Duong's top position in the ranking, as they have 22 points, two more than Thanh Hoa in second place.

The rest of the rounds will be organised this weekend.

Song Lam Nghe An is travelling to play against Dong Thap without its best players.

The former champions have been winning with their young members and coach Ngo Quang Truong.
After beating Hoang Anh Gia Lai 2-0 last week, they are currently ranked at the fourth position with 17 points.
However, captain Quang Tinh will not join the team tomorrow as he has already received three yellow cards and must be side lined.

National midfielder Ngo Hoang Thinh is also missing from the team after being quarantined since last week because of mumps.

Song Lam Nghe An have not lost any match this season and have won the last four matches.

Dong Thap have not been delivering impressive results like their rival. They are ranked at number 10 at present with eight points. During their two latest matches at home, they had emerged as the winners.

However, history is on the side of Song Lam Nghe An as they have won five matches, drawn five and lost two during their last 12 meetings.

Hoang Anh Gia Lai vs Dong Nai is also a match that will be worth watching as they are currently two out of the three teams ranked at the bottom of the table.

Despite playing at home, Hoang Anh Gia Lai is said to have encountered a lot of difficulties for their third win.
Captain Luong Xuan Truong had continued to watch the game from the bench as he has not recovered from an injury.

Their national U-23 members, such as Nguyen Cong Phuong, Nguyen Tuan An and Van Toan have not found their best form in the domestic competition.

However, coach Tran Binh Su of Dong Nai seems to know by heart all of Hoang Anh Gia Lai's weak points.
"Hoang Anh Gia Lai are a suitable team for us. The younger players do not have enough competitive experience. They easily buckle under pressure and when faced with a difficult situation," said Su.

"Hoang Anh Gia Lai's players are also not in a very good physical form at the moment and their shots are not dangerous enough despite their good technique. We will make use of these disadvantages to get a good result," said Su.

"We are in very dangerous situation so every match will be fought like a final. We have to play every game carefully to escape from this tough spot," he added.

Su also welcomed Huu Thang and Ngoc Quoc back to action after a one-match ban.

They will make a perfect team with senior players Huynh Kesley, Hai Anh and Van Pho, who drew 1-1 against the national U-23 squad during a recent friendly match, which saw seven Hoang Anh Gia Lai players competing.

Another match to watch out for will be the 10th round of the Dong Tam Long An vs Quang Ninh Coal.
Long An is the only team to have not lost any match this season, while Quang Ninh has scored the best result while playing on foreign grounds with four wins and a draw.