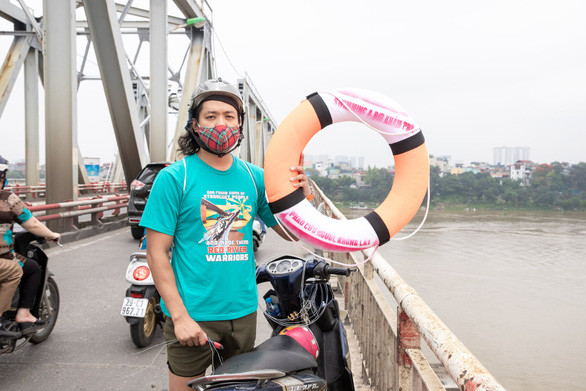 A member of the Khám Phá (Discovery) Swimming Club places a lifebuoy on the Chương Dương River in Hà Nội with the hope of rescuing drowning people. Photo courtesy of Nguyễn Ngọc Khánh

On each lifebuoy, the volunteers wrote 'For rescuing people'.

Other bridges crossing the Red River such as Thăng Long, Nhật Tân, Chương Dương, Vĩnh Tuy and Thanh Trì have also been equipped with the lifebuoys.

Placing lifebuoys along the bridges is part of the volunteering activities of the Khám Phá (Discovery) Swimming Club led by a 35-year-old man, Nguyễn Ngọc Khánh.

The activity started in April and will continue along bridges in six localities from the northern Lào Cai to Thái Bình provinces.

On May 14 in Hà Nội, 20 volunteers, mainly parents of children in Khánh's free swimming club, divided into groups, rode motorbikes or walked, depending on the size of bridges, to hang lifebuoys. The job took all day.

The group used steel wire and twisted it to keep the lifebuoys on the bridge walls.

"We have hung a total of 33 lifebuoys at six bridges. There are around six lifebuoys along each bridge," Khánh told the online newspaper toquoc.

Between May 6 and 15, 100 lifebuoys have been placed on bridges in 10 localities.

Previously, from May 6 to 8, apart from supplying lifebuoys, the Swimming Club organised free swimming lessons, river skills and rescue skills for people in three provinces of Lào Cai, Yên Bái and Tuyên Quang, receiving widespread support from the community. 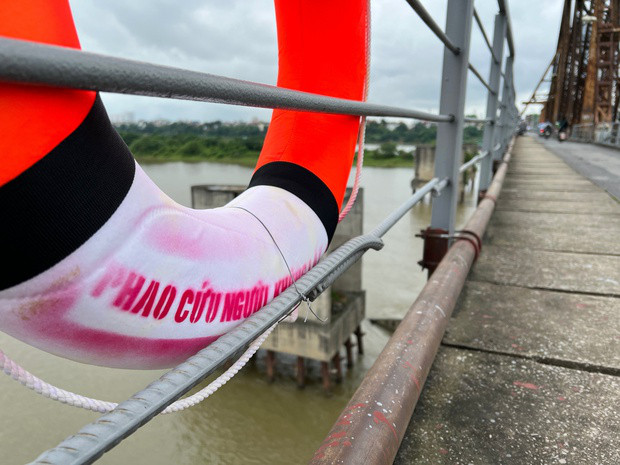 A lifebuoy is placed at Long Biên Bridge. Photo courtesy of Khánh

"When we hang buoys on the bridges, people were surprised. They said many people had committed suicide by jumping down from the bridge, but no one thought of hanging lifebuoys there to save people," Khánh said.

Khánh said bridge suicides occurred on most bridges. He and his group have heard many stories of people who ended their lives by jumping into the water.

Khánh recalled the day he hung lifebuoys along the Yên Bái River and found a handbook next to a slipper. It was a handbook with different debts noted.

"When people suffer life pressure and have no one to help or share their feelings, they often seek death to escape their misery, but they have wasted their long life ahead," he said.

Lifebuoys, in some cases, can be a last resort for these people to return to life.

Hà Văn Cương, a 24-year-old member from the northern mountainous province of Lào Cai, said he joined the swimming club about four months ago when he went swimming in the Red River with his friends.

Cương said apart from those who lost their faith in life, many unfortunate people also had accidents on the river.

Lifebuoys could help these people in certain situations, he said.

A local official from Long Biên Ward's People's Committee said he knew of the activity of the volunteers and believed it was a beautiful action if someone in danger could be saved.

Khánh said he established the Swimming Club after he nearly drowned four years ago.

In 2018, he followed a group to join a long-distance swim in central Thanh Hoá Province. It started to get dark about 15 minutes after he jumped into the water.

Other members realised the situation and quickly swam to the finish line, but Khánh struggled to find his way. He was even forced to take off his swimming glasses and swim with his head up to find the way.

When his body started contracting, Khánh feared he would die.

"While my limbs were staggered and waved, I discovered the white lifebuoy left by a swimmer, so I quickly grabbed it and swam to the shore," he said.

After the incident, he was determined to practise swimming in rivers and lakes at increasing distances from 10km to 20-30km.

In early 2020, Khánh founded the Swimming Club to gather people with a passion for swimming. Club members often practise swimming a distance of up to 40-50km in rivers.

After three years of operation, the club has more than 4,000 members.

Khánh said he wants to contribute to the community through practical knowledge as well as satisfy his passion for swimming.

He posted a photo on his personal Facebook page, calling on people to act for the community through a volunteering programme called "Love of the Red River".

The programme will last for 10 weeks, providing free swimming lessons for children in six provinces and cities along the Red River, as well as first aid skills, and hanging lifebuoys on the bridges.

After one night, 50 volunteers signed up to participate.

Replying to information that half the lifebuoys had been taken away after four days of placing them on bridges, Khánh said he planned to put new ones up in the next week.

"The club plans to place more on the Đuống and Đông Trù bridges next week, and we will place new ones on Nhật Tân and Chương Dương bridges on the way back," he said.