CBU (complete built unit) imports have been flooding the Vietnamese market while domestic factories have cut output, raising concerns among car part manufacturers that they may lose jobs.

Enkei from Japan entered Vietnam in 2007 as a supplier of car parts to Toyota, Truong Hai, Honda, Nissan and Mitsubishi. Specializing in making alloy cast rims for automobiles, the company can churn out 24,000 products a month and has increased investment capital by 50 percent. However, scaling up production remains a big challenge. 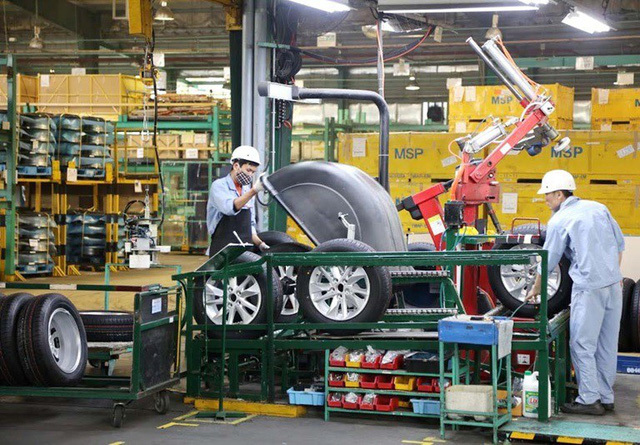 The domestic car market has been growing with increasingly high demand. However, CBU imports have been flooding the market. A representative of the company said Enkei has seen a 10 percent decrease in orders, while other producers could go bankrupt.

“We have to have orders for 100,000 products a month to achieve the desired production efficiency. With modest orders, each product has production cost 5-10 percent higher than other regional countries,” he said.

Speaking at a workshop on developing support industries for automobile manufacturing in late 2018, Shinjiro Kajikawa, deputy CEO of Toyota Vietnam, also said that the disadvantages in car output places difficulties for the development of support industries.

To make front and rear bumpers and taplo, enterprises need an investment of $12 million and the time needed to recoup investment capital is five years.

If the output is 60,000 products a year, the production cost falls by $64 per product, and revenue is $3.8 million, then enterprises can consider investment.

In Vietnam, Toyota Vios has the highest output, 27,000 products a year.

According to Tran Ba Duong, chair of Truong Hai Automobile (Thaco), the most important factor for car part manufacturers is the output.

Vietnamese enterprises are willing to spend big money to manufacture engines in Vietnam. However, if the output is lower than 50,000 products a year, manufacturers would face big problems. If domestic consumption is low, manufacturers will have to think of exporting products. However, it is not easy to seek buyers.

The Ministry of Industry and Trade (MOIT) confirmed that Vietnam’s support industries, which are in difficulties, will even face bigger problems once the output reduces.