Minh Phu Seafood Corporation (MPC) has been listed among the world’s 100 largest seafood companies in 2014, according to the latest report by UK-based Undercurrent News.

Minh Phu Seafood Corporation (MPC) has been listed among the world’s 100 largest seafood companies in 2014, according to the latest report by UK-based Undercurrent News. 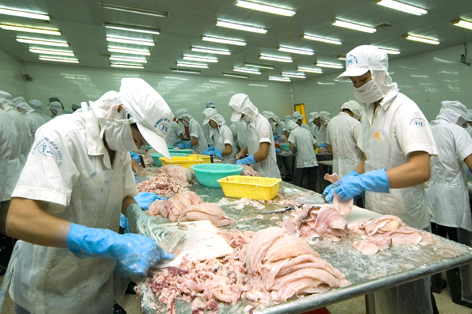 The Vietnamese company ranked 23rd on the list thanks to a 41% increase in its revenue.

The corporation is currently going private and is in the process of purchasing more than 16 million shares from its shareholders at the price of VND20,000-100,000 (US$1-5)/share. It plans to cancel its listing on the HCM City stock exchange after paying dividends to its shareholders later this month.

Undercurrent News said the global seafood sector is highly fragmented across continents and markets, but some companies have emerged as leaders, in one field or across several activities.

Combined, the 100 top companies on its rankings this year had revenues of nearly US$100 billion, up by US$1.8 billion from 2013’s figure.

The ten largest companies – with revenues of more than US$2 billion each – accounted for over a third (US$35 billion) of the total and the 25 largest for over half (US$57 billion).