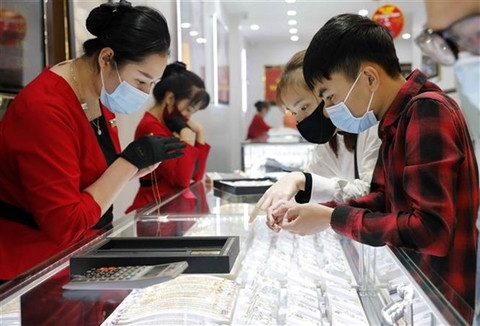 With the price of a tael of gold in Viet Nam more than US$800 higher than in the rest of the world, local experts say the local regulation of gold prices is unsuitable.

Sliding about VND1 million, a tael of the national SJC-branded gold prices stayed at VND69.5 million ($3,021).

In February 2020, the gap between prices for a tael of gold was about VND2 million ($86), nine months later, the gap was doubled to VND4 million ($172). At the time, experts considered such a disparity to be unusual. This caused concern about the exchange rate and restrictive policies in buying and selling gold.

However, by February 2021, the gap had widened to VND8 million, and many experts said the country's gold market was disconnected from the world.

Huynh Trung Khanh, deputy chairman of the Vietnam Gold Business Association, said: “ Viet Nam has not imported gold for 10 years, the supply is scarce, and the gap between the world gold price and SJC gold has jumped to a record high.”

In the market, the sky-high difference only happened with SJC gold bars, other types of 9999 gold of domestic enterprises have a small difference, quite close to the world price, fluctuating at near VND4 million ($172).

According to insiders, in 2012 when the Decree 24 on the management of the gold business was issued by the State Bank of Viet Nam (SBV), SJC was chosen as the national brand of gold bars while other types of gold rings and gold jewellery were not.

The director of an enterprise said that at present, SBV does not allow the import of raw gold for making gold bars, so the difference between the domestic and international gold prices was caused by the shortage of raw gold materials.

Meanwhile, gold for jewellery has an abundant supply, so the price does not rise too high compared to the world price, even with increased demand.

Economic expert Dinh Trong Thinh said that Decree 24 has contributed to combating the "goldenisation" of the economy. However, the regulations on monopoly gold bars were no longer appropriate as the difference between the world and domestic gold prices was at a record high.

Thinh said: "In actual operation, Viet Nam must make adjustments so that the domestic gold market connects with the world, reflected in the reasonable export and import of gold. Moreover, Viet Nam has accepted the market economy, and it is necessary to build a gold market according to international practices."

Economist Ngo Tri Long said that Decree 24 was born appropriately at the time of its issuance, especially in the context that the gold price has a great impact on the macro-economic situation and monetary policy.

He added: "Decree 24 has many shortcomings. It should be amended. SBV has held many meetings and discussed amendments, but it still stands."

Long said if the gap between the world and domestic price continued, gold smuggling would return and lead to a loss of foreign currency. Therefore, the SBV needs to have timely solutions to narrow the gap and reduce demand pressure.

"The domestic gold price is not in line with international practices. Since the central bank has a monopoly on SJC gold bars, Viet Nam only has one gold brand,” said Long. “No country has only one brand of gold like that."

Director of AnVi Law Firm Truong Thanh Duc said that Decree 24 on gold business management was born necessary to combat the risk of "goldenisation" and "dollarisation" of the economy at the time of issuance, but up to now, the authorities needed to consider and amend the Decree to be appropriate in the new situation.

Duc considered that though SBV recognised the shortcomings, its adjustments were slow, and the domestic gold market was still distorted, causing damage to consumers.

He said: "Though there is a roadmap for amending Decree 24 on gold business management, it has been delayed. Such matters seem not to affect the banking industry like it has for the gold association and gold investors.’

The Vietnam Gold Traders Association has repeatedly submitted petitions to SBV on the replacement of Decree 24, asking the central bank not to produce gold bars nor use SJC gold bar as the exclusive brand but instead license several eligible businesses to produce gold bars and be responsible for their trademarks according to the volume, quality standards and weight registered with the State management agency.

The association also recommends the establishment of a national gold exchange to create a connection between the domestic gold price and the international gold price.

In response, SBV’s authorities said they still saw the risks and complexity of such exchange as it related a lot to foreign currency issues and management mechanisms and could create "goldenisation" in the economy, adding the amendment of Decree 24 should take time to resolve.