Tran Van Dang spent weeks in hospital after breaking his arm at judo practice when he was a boy, and the possibility that he would never play any type of sport again was very real.

Seven years on, the 20-year-old celebrated his win in the 1,500m at the recent National Athletics Championship with Usain Bolt’s signature move, the 'Lightning Bolt'. 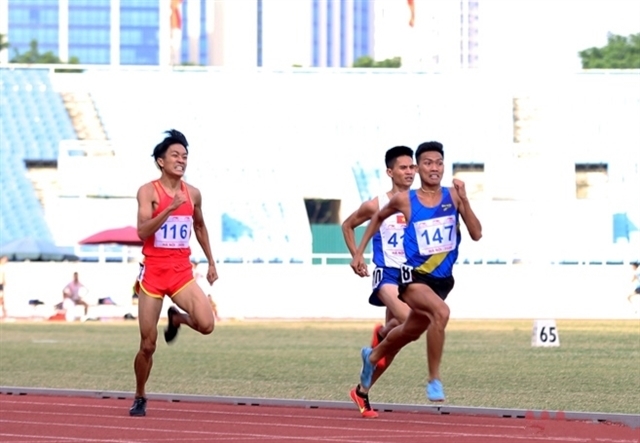 The win really was special for Dang, as he beat multiple SEA Games champion Duong Van Thai and boosted his hopes of picking up gold at the Games in Hanoi next November.

“It was the first time I’d ever beaten Thai at this distance,” Dang told media at the capital’s My Dinh Stadium while surrounded by hundreds of fans.

“It’s unbelievable! I just wanted to run a personal best and compete. I didn’t imagine I could beat him.”

From judo mat to running track

“I was always the fastest of my classmates at school,” he remembered. “I even won races at school against kids who were much older than me. So I knew I was good at athletics. But I was chosen for judo when talent scouts came to the school to recruit athletes.”

The 13-year-old Dang then left his native Tho Xuan Commune in Hanoi's suburban Dan Phuong District to start a new life at the city’s training complex.

But just a few short months later he was in hospital with a broken left arm.

It was 2013, and Thai, meanwhile, was taking part in his second SEA Games, cruising to victory to defend his titles in both the 800m and 1500m events.

“I watched him win from my hospital bed and admired him so much,” Dang told Vietnam News. “I dreamt of one day also taking a victory lap with the national flag draped over my shoulders.”

After hospital came a long period of rehabilitation, with his parents wanting him to stay home and pursue his studies.

“My father worried a lot, saying I was born normal but now I’m handicapped,” he recalled. “He asked me to stay at home again, but I didn’t want to leave sport behind. So I asked my coach to move me to the athletics team.”

The experience of the two champions brought out Dang’s best in events that require a perfect combination of speed, endurance and tactics.

His potential was there for all to see and he was sent to China for long-term training a year later.

“I was sad and homesick,” he said. “I would feel jealous that teammates were competing while I only ever seemed to train.”

“But my coaches counselled me, saying my situation was different. It strengthened my determination and I sharpened my technique at that time. I wanted to overcome challenges that other people can’t. It is how to succeed.”

Dang didn’t take part in any youth tournaments but shook the foundations in his competitive debut at the National Sports Games in 2018.

“It’s difficult to express my feelings at that time. Happyyyyy! No one imagined a freshman like me could beat the SEA Games champion -- my idol,” Dang told Vietnam News.

A year later, though, Thai exacted revenge, showing his power at the national championships and soundly defeating Dang in the process.

The loss was put down to a lack of experience and poor tactics on the young man’s part.

The silver, though, was enough for Dang to secure a spot in the team for the SEA Games in the Philippines a few months later. In his first international event, he finished sixth in the 800m, after picking up a knee injury, while Thai defended his title in the 1500m with a time of 4:06.63.

Losses have been shown to drive the young runner forward, with him shining brilliantly in Hanoi last month.

“I’m neither nervous nor confident when I come up against Thai,” he said. “I just want to compete to the best of my ability.”

“I finished second last year because I tried to take the lead at the beginning but then faded near the end and couldn’t match Thai’s sprint.”

“This year, we changed our tactics. I stayed in the middle of the pack and waited until the last hundred metres to pass everyone and win.”

“It worked really well. I was tired in the last few strides but kept going.” His exploits made headlines in the next day’s newspapers.

Dang beat Thai for the second time in the 800m. This time it looked even easier, though no doubt it was anything but. While in the 1,500m he passed Thai in the very last stages, in the 800m he left him far behind and finished well ahead.

“I told myself that my body shape and running capacity aren’t as good as my competitors’, so I spent more time after training sharpening my skills to improve my times,” Dang revealed.

“In addition to my ability, I believe I need to remain calm and focused to win.”

“I want to be in the national team for next year’s SEA Games. While I’ve run at 100 per cent of my capacity this year, I will need to be at 200 per cent to win a gold on home soil.”

He is also expected to continue Vietnam’s dominance in middle-distance events at the SEA Games.

“Dang’s wins are good signs for Vietnam, as it shows we have young talent coming through to replace our aging runners.”

Coach Dong, meanwhile, said the challenges Dang went through when training in China gave him an iron spirit and great determination. These may well help the hard-working and talented youngster win gold at the SEA Games in Hanoi next year.