Visiting pagodas during the Lunar New Year festival is not merely an activity associated with Buddhism but it has become an age-old cultural tradition, and an indispensable part in Vietnamese people’s spiritual life 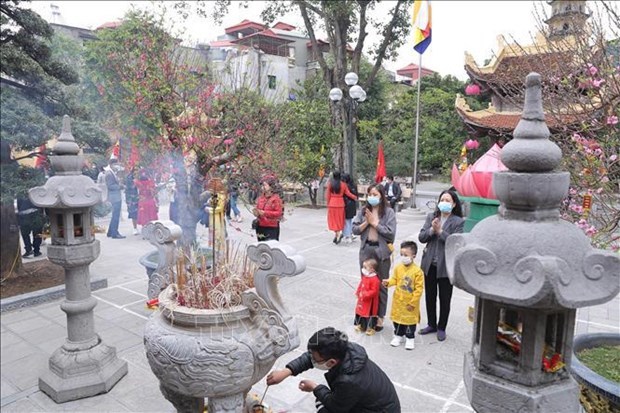 Visiting pagodas during the Lunar New Year festival has become an age-old cultural tradition, and an indispensable part in Vietnamese people’s spiritual life.

In the mind of Vietnamese people for generations, Tet not only carries the meaning of saying goodbye to the old year and welcoming the New Year, but is also associated with spiritual values and beliefs. On the first days of a new year, people go to temples and pagodas to pray for good luck for their families for the year ahead.

Some go to a pagoda not just to pray for good things in the coming year, but also to reflect on what they have done in the past, find peace for their soul and leave all hardship behind.

For Mrs. Thuy Ngan in Nghia Tan Street, Cau Giay, Hanoi, going to the pagoda at the beginning of the year is a way to teach her children about the traditional culture of the country.

People also go to pagodas at the beginning of the New Year to ask for calligraphy works or “cau doi” (calligraphic couplets), and to enjoy the pagodas’ beauty and serene atmosphere.

Nguyen Ngoc Hung in Trung Kinh, Ha Noi, said after the New Year's Eve, his family’s members often go to pagodas, first to find peace in mind in the pure and peaceful atmosphere there and then to make prays for all people in the family.

For every Vietnamese, going to pagodas at the beginning of the year is a traditional custom that has been formed for a long time, which contributes to creating a rich national culture.

This custom not only expresses the desire for a happy and prosperous life, but also helps teach Vietnamese people about their roots and traditions of the country.

Party General Secretary Nguyen Phu Trong made a Tet visit to officials and people of Hanoi on the eve of the Lunar New Year (January 31).