Made-in-Vietnam in the fight to find a place

VietNamNet Bridge - Most of the anti-dumping lawsuits targeting the labor and environmental resources intensive industries. These are the "holes" vulnerable to trade defense measures for piercing.

VietNamNet Bridge - Most of the anti-dumping lawsuits targeting the labor and environmental resources intensive industries. These are the "holes" vulnerable to trade defense measures for piercing.

Where will you go, Vietnamese products? 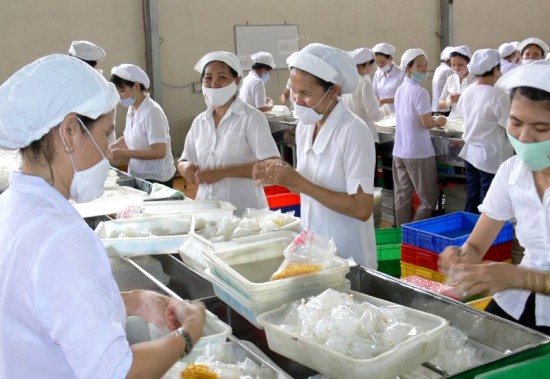 To be fair, as the "United Nations" is dedicated to trade liberalization, the WTO has done a great work in promoting international trade, restricting and breaking down the tariff and non-tariff barriers through multilateral negotiations. But when it comes to agricultural markets, the Doha negotiation initiated by the WTO has been stalemated.

Although agriculture accounts for only 3 percent of the total global trade, it is extremely important because it is directly related to farmers, who account for 70 percent of the population in developing countries and underdeveloped countries. The very lofty idea of the WTO - to lower export tax rates on agricultural commodity of developing countries to 3 percent – has been always neglected by the developed world.

Dr. Nguyen Tien Hoang, from the Hanoi University of Foreign Trade, says: "The developed countries are trying to protect their interests so they have created walls impeding progress in the Doha negotiations."

Japan is a country that has suffered from the protectionism in the European countries and the United States. To enter the U.S. market, Japanese goods had to go through tough journeys. Japanese businesses are admired for their patience and effort in conquering the US market.

But Japan is also the top "accomplice" of the protectionism. The Japanese agricultural market is shielded by a huge fence. Its import tax rate on rice is close to 800 percent, highest in the world!

Since the 80s, under the world’s pressure, Japan has got rid of some trade barriers but in agriculture, the Japanese still hold the domestic market. Foreign agricultural products are very difficult to set foot in Japan.

The contradiction of Japan represents a current reality in developed countries. In theory, they have always supported trade liberalization. But on this journey, they take protective measures to ensure the immediate benefits. So that protectionism is always tied to political institutions.

Portrait of the "culprit"

Political mechanisms in many developed countries are the source of protectionism and also a fertile ground nurturing them.

In the U.S, each congressman represents 700,000 voters. Senators represent states. Each state has two senators. This mechanism aims to reconcile the interests of the states whether they are big or small. However, in the 21st century, this mechanism has led to the major influence in the Senate of interest groups in the agricultural sector. The National Journal bluntly said: "The political system in the United States has increased support for agricultural subsidies. This has distorted trade.”

For the past 10 years, Vietnamese basa and tra catfish was the source of high-quality and cheap food of American consumers. But also, the Vietnamese catfish was one of the reasons that made the catfish farming area in the state of Mississippi decline from 67,000 hectares to 33,000 hectares. The U.S. catfish farmers’ association immediately used electoral votes to influence the U.S. trade policy. In the past 10 years, Vietnamese catfish has faced a series of anti-dumping and subsidy lawsuits.

In France, farmers account for only 4 percent of the voters, they contribute 8 percent of the votes in the general election. The French electoral system allows farmers to very easily become MPs and officials. In fact, more than one third of the mayors in France are farmers who are still sticking with farms.

In the French Senate, in the past four years, many senators are farmers. Any presidential candidate must pay special attention to the interests of farmers. French President Jacques Chrac, thanks to the votes of French farmers, won big in elections. The policies made during his presidency were called by the Western media as "minions of organized agricultural system!"

It is similar in the two Asian countries - Japan and South Korea. In these countries, the food industry is strictly protected, driving up the price of food items, fruits and vegetables.

Experience and lessons for Vietnam

The first commercial television sets in the world appeared in U.S. showrooms in the early 50s. Whether TV sets are the products of many scientists from many countries, the results of study in more than 50 years, America is the place where made the first complete TV sets.

Yet soon after, the Japanese "finish" the US’ television industry in the '70s. In American families, Japanese television sets of Sony, Panasonic or Sharp were very popular. The U.S. government and American people highly appreciated the Japanese and Japanese goods in the United States after they passed American protection barriers.

Similarly, Japanese car manufacturers have wisely avoided protection measures of the U.S. to strongly expand in this market by switching to produce high-quality car on American soil.

The Japanese have learned that they cannot grow and develop without setting a foothold in the U.S. market! Perhaps this is also the conclusion of many other countries. And, dealing with the alleged anti-dumping and subsidies in the U.S. market is very normal.

According to experts, Vietnamese businesses should take the initiative right from the start to avoid being entangled in litigation. Therefore, they need to diversify markets, diversify products to avoid pressure to compete with local competitors. On the other hand, they need to convert and upgrade product quality continuously instead of competing by cheap prices.

Most of the anti-dumping cases against Vietnam aim at the labor and natural resource intensive industries. These are the "holes" vulnerable to trade defense measures. The investment in science and technology will help resolve it.

When being sued, Vietnamese businesses must play an active role, actively involved in answering the questions. They should coordinate with state management agencies on trade protection and associations for being advised fully and getting information. More importantly, they need to be prepared in any situation because such lawsuits will continue to happen and it can happen to any export business.

The path of trade liberalization is full of obstacles but it is inevitable. Dr. Pham Van Chac, a member of the research group on economic integration of the Ministry of Trade and Industry, says: "None of power can turn this inevitable trend." However, because of temporarily political impacts, the protection “devil" can win in this place or elsewhere, but the time and the overall trend will be important allies for trade liberalization. During this time, Vietnamese goods need skills, legal and social knowledge and business innovation to overcome the challenges.