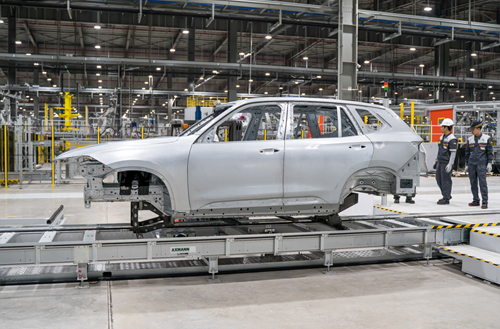 The representative of a large manufacturing enterprise said previously the firm mostly worked as a contractor for construction works. But leaders understand that the enterprise needs to shift to production for sustainable development.

“That is why we have established a series of production companies, cooperating with foreign partners and using the most advanced technologies to make products bearing Vietnamese brands,” he said, adding that products have been selling well in Vietnam and will be exported.

“We joined the market later than other enterprises. Therefore, we need to use the most advanced technologies, go straight to digital transformation to create the products with highest quality and at reasonable costs,” he explained.

The strong rise of many Vietnamese enterprises in recent years has made Vietnam better known in the world market. BKAV and Vingroup make smartphones, while Vinfast manufactures cars, showing the considerable progress of Vietnam’s industry.

Vietnam is the destination of many large multinationals such as Intel, Samsung, LG and Apple vendors.

Giving a presentation at the 13th Party Congress on January 28, Minister of Industry and Trade Tran Tuan Anh said Vietnam has become one of the countries with high average global competitiveness in industry.

The global competitiveness of Vietnam’s industry has increased by 16 grades over the last 10 years, from 58th in 2009 to 42nd in 2019 according to UNIDO ranking. It is the country with the fastest grade promotion in ASEAN, coming closer to the top ASEAN 4.

In 2011-2020, industry was the sector witnessing the highest growth rate, which made up 30 percent of GDP and became the major export sector of the country, helping Vietnam jump from 50th in 2010 to 22nd in 2019 among the world’s biggest exporters.

The way to prosperity

According to Anh, Vietnam's key industries include oil and gas exploitation and processing; electronics, telecommunication and information technology; metallurgy and steel manufacturing; cement and building materials; textile and garment and footwear; mechanical engineering, processing and manufacturing, automobiles and motorbikes.

These are an important foundation for long-term growth and help accelerate modernization and industrialization.

Manufacturing and processing sector has shown its importance, from the rise of the UK in the 19th century, the US, Germany and Japan in mid-20th century, to newly industrialized economies such as South Korea and Taiwan in the late 20th century and China recently.

The success of the economies is proof that manufacturing and processing is the way towards development, the key to prosperity of every nation.

In Vietnam, industrial development has changed the outlook of many areas. In addition to the localities with long lasting industrial foundation such as Hanoi and HCM City, the provinces in the southeast and the Red River Delta and provinces in the central region have also become bright spots on Vietnam’s map of industrial centers.

These include Quang Ngai province with Dung Quat Economic Zone, Thanh Hoa with Nghi Son Economic Zone and Ha Tinh with Vung Ang. In the north, Samsung manufacturing complex in Thai Nguyen and Apple’s vendors in Bac Giang serve as the driving force for the localities to become more prosperous.

However, Anh pointed out that Vietnam’s industrial production activities are just in the final stages which bring low added value. There are other problems in industry, including unconnected development between industries, leading to unsustainable development.

The production and export of Vietnam’s industrial products is mainly promoted by foreign invested enterprises (FIEs) which make up 70 percent of total export turnover.

Anh believes that it is necessary to focus on accelerating restructuring to improve industries; develop Vietnamese enterprises; and consolidate large firms which are the driving forces in key manufacturing fields, especially fields which apply high technologies.