The Dak Nong Provincial People's Court has given a 15-year sentence to a local man for swindling donated money from dozens of disadvantaged people who were supported by the community. 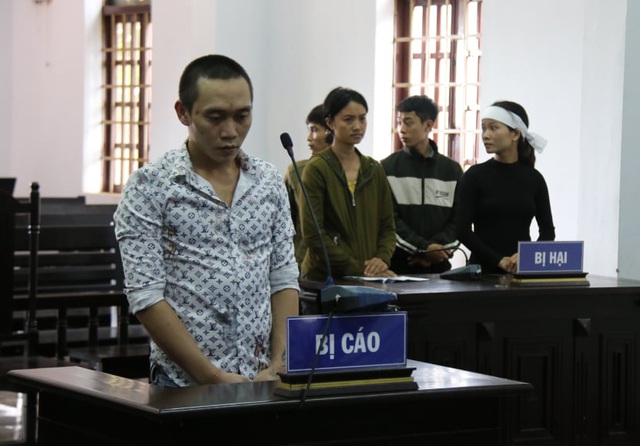 Nguyen Van Phuc and  his victims at the court on November 25.

According to the indictment, Nguyen Van Phuc, 23, who resides in the central province of Quang Nam knew about some disadvantaged people receiving donated cash from the public since early 2020 when joining some online charity groups.

He used different Zalo and Facebook accounts to get the information. He also bought two bank accounts from Pham Van The Vu and To Thi My Hiep at VND14 million (USD609) per account.

Phuc then designed and operated some fake bank websites. He used different phone numbers to call the victims with his voice changed by digital apps, telling them that he wanted to send money to help them. He said that he would send from an international bank account so the victims must click into a link he provided and fill in some information.

After the victims fill in some required data into the link, Phuc will get all the necessary information about their bank accounts including passwords. And he transferred the money into his own accounts.

At the Wednesday court, Phuc said that he had used the tricks to swindle money from 23 people including eight cases from Dantri/DTiNews' Charity Column.

Most of the victims are orphans, people injured in accidents or having serious illnesses, and those in special disadvantaged situations who have called for financial support from the community.

Four of Phuc's victims arrive at the court.

One of the victims is a woman, Le Thi Thu Thao, who lost her husband at the Rao Trang 3 Hydropower Plant landslide in Thua Thien-Hue Province in October. After Thao's story was published on Dantri/DTiNews on the early morning of October 20, she had received nearly VND250 million (USD10,869) from donors in and outside the country to her bank account by the afternoon.

And Phuc also called her that day saying that he wanted to send money to help her. He told her to fill some information in the link he sent to receive the money. And just a while after Thao followed, she found that her account lost VND100 million (USD4,348).

Thao had reported the case to Dantri/DTiNews and was instructed to contact the police who have expanded their investigations to find dozens of previous cons by Phuc.