VietNamNet Bridge – The Ministry of Home Affairs has said that in the recent personnel scale upgrade examination for public servants, about 30 percent of the participants failed, most of them are officials.

VietNamNet Bridge – The Ministry of Home Affairs has said that in the recent personnel scale upgrade examination for public servants, about 30 percent of the participants failed, most of them are officials. 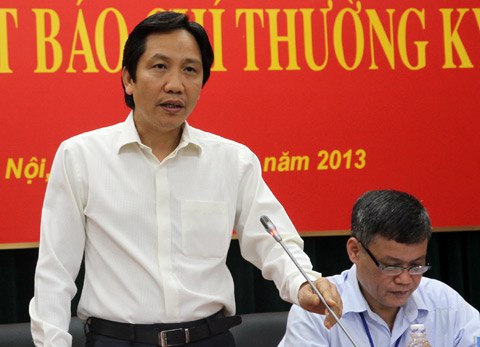 Talking to the press on June 24, Deputy Minister of Home Affairs Tran Anh Tuan said of the 22 civil servants of the Ministry of Home Affairs, nine failed the exams.

Tuan said that candidates must score over 50/100 points for all subjects to pass the exams. For the first time this examination was held in the competitive form. Therefore, the number of contestants failing the exams is much higher than the previous exams.

"Most of the failing contestants are officials. I myself come under pressure in this test, but it is important to ensure fairness in the examination," Tuan said.

Earlier this year, for the first time, the Ministry of Home Affairs held a computerized exam to recruit public servants. Thirty people passed the exams.

According to Deputy Minister Tran Anh Tuan, this form of recruitment ensures fairness. This approach has been warmly supported by many provinces.

The northern port city of Hai Phong has applied this form of recruitment. In the near future, this format will also be applied in Hanoi and some ministries.