Speaking at the opening ceremony, Thai Foreign Minister Don Pramudwinai affirmed the importance of ARF in promoting dialogues and political-security co-operation in the region.

He asked countries to seek measures to step up regional security based on international law, regional rules and standards and mutually beneficial collaboration.

Ministers agreed to continue fully implementing the Hanoi Plan of Action 2010, the ARF Vision Statement and past agreements, focusing on the priority fields of search and rescue, fighting terrorism and trans-national crimes, maritime security, non-proliferation of weapons of mass destruction, maintaining peace and new security challenges such as cybersecurity.

They adopted ARF’s declarations on peace and security, the fight against terrorism and extreme violence and action plans for 2019-2020 including activities and seminars featuring different topics ranging from ensuring security and raising public awareness of marine space, search and rescue, to responding to cyber security incidents.

Amid rapid changes in the world and in the region, ASEAN minsters agreed to continue carrying out measures to improve the ARF to help the forum maintain its role and boost adaptability to current challenges.

They said they will examine the ARF Vision Statement and the Hanoi Plan of Action 2010 to set out new development orientations for the forum.

Discussing international and regional matters, the ministers acknowledged progress on the Korean Peninsula, calling it a significant contribution to the long-term goal of peace, stability and the denuclearisation of the peninsula.

They highlighted the importance of dialogues and co-operation in resolving differences and of the commitment to respecting relevant resolutions of the UN Security Council.

Many ministers expressed their concerns over the recent developments in the East Sea, including a number of serious incidents in the region.

They continued to stress the importance of maintaining peace, stability, security, safety, as well as freedom of navigation and flight in the area, and spoke highly of the 1982 United Nations Convention on the Law of the Sea (UNCLOS 1982).

They called on parties involved to exercise restraint and refrain from militarisation as well as actions that could complicate the situation, and to fully and effectively implement the Declaration on the Conduct of Parties in the East Sea (DOC).

Noting progress in the negotiations of the Code of Conduct (COC) in the East Sea, the ministers agreed that the current context requires an effective and practical COC in the East Sea that is in line with international law.

Addressing the event, Deputy Prime Minister and Foreign Minister Minh spoke highly of ARF’s role and value in enhancing dialogues and co-operation in political-security issues of shared concern and coping with regional challenges.

To intensify adaptability to the rapidly changing security environment, the official suggested building a new development vision for the ARF in tandem with revamping the forum’s operation methods, saying this is a major target for 2020.

Minh expressed the importance of peace, stability and respecting the law in the region and the world.

He applauded the recent progress on the Korean Peninsula, including summits between leaders of the US and the Democratic People’s Republic of Korea (DPRK), and said he hopes the sides will maintain the momentum and continue dialogues in order to iron out their differences.

Regarding the East Sea issue, the official acknowledged progress in the negotiations of the COC.

He, however, also held that there are still grave concerns over developments in the area, including unilateral moves and serious incidents, particularly actions that have seriously violated the sovereign rights and jurisdiction of littoral countries.

Minh proposed concerned countries uphold the respect of international law, including rights and interests of coastal states in line with the UNCLOS 1982, fully and effectively observe the DOC and maintain a favourable environment for negotiations in order to reach an effective and practical code. 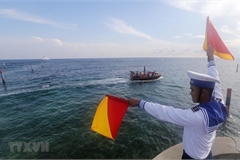