After Tiki and Sendo complete their merger, the e-commerce market will be controlled by three big players – Tiki-Sendo, Lazada and Shopee.

The Vietnam Competition and Consumer Authority (VCCA) confirmed that it has received the dossier about economic concentration between Sendo Technology JSC (sendo.vn) and Tiki JSC. 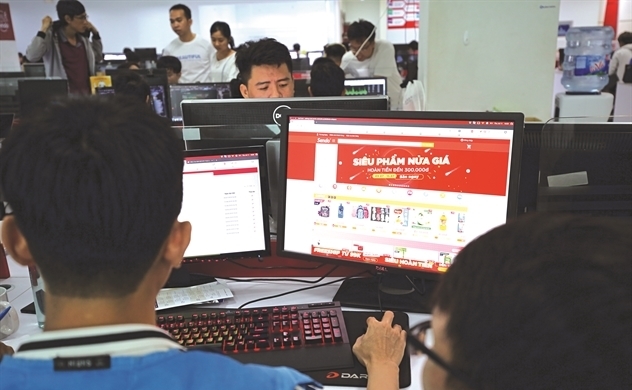 Tiki and Sendo, two Vietnamese players in the e-commerce market, are taking final steps to wrap up the M&A. Once the deal is completed, one Vietnamese company, stronger after the merger, will battle with the two foreign firms Lazada and Shopee.

A lot of players that could not survive had to leave the market or merge with their rivals, such as robins.vn. zalora.vn, vuivui.com, adayroi.com and lotte.vn.

According to Yoshihiro Ishawata, vice resident of SBI Venture Capital, the competition among the four big players will be fierce. M&A deals will be made and only 2-3 firms will exist to control the market.

Lazada and Shopee are both backed by holding companies which are technology groups with powerful financial capability.

Tiki and Sendo are relying on Vietnamese and foreign shareholders.

Lazada received up to $4 billion worth of capital from Alibaba (China), while SEA (Singapore) pumped VND1.2 trillion, or $50 million, to increase Shopee Vietnam’s charter capital.

Tiki has a significant amount of capital from new and existing investors, while VNG and JD.com remain the two major shareholders.

As for Sendo, it successfully called for $61 million worth of capital more from Series C round at the end of November 2019. Foreign investors, including SBI, Beenext, Econtext Asia and Daiwa, now hold 61.1 percent of shares, while FPT remains the biggest shareholder of Sendo.

“The merger will be good for the market, because Tiki and Sendo will support each other to increase their strength and competitiveness. Sendo has advantages in rural areas and suburbs, while Tiki is strong in large urban areas,” said Nguyen Ngoc Dung, deputy chair of Vecom.

Meanwhile, Dang Dang Truong from iPrice Vietnam said with the merger, both Tiki and Sendo will keep following their ways, but also expand the market and attract investments. Tiki and Sendo, after the merger, will be able to call for up to $100 million worth of capital.

The e-commerce market is expected to witness competition between Tiki-Sendo, Shopee and Lazada, after Tiki and Sendo join under the same roof, slated for this year.