High school maths teacher Duong Van Kien in the central city of Da Nang has a unique way of encouraging his students, presenting them with his elegant handmade pencil sculptures. 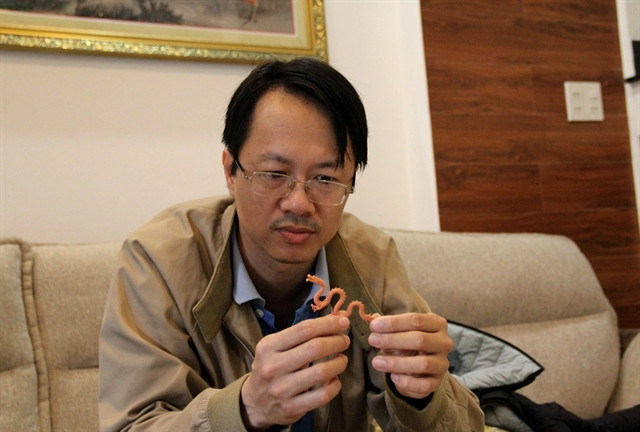 High school maths teacher Dương Văn Kiên in the central city of Đà Nẵng has a unique way of encouraging his students, presenting them with his elegant handmade pencil sculptures.

The pencil gifts come in various shapes and sizes, mostly carved with names or into sophisticated figurines like a chain, a phoenix or a dragon.

Creating such artworks has been a hobby of the 41-year-old teacher of Hoàng Hoa Thám High School for nearly 10 years.

"I have always had some pencil sculptures in my bag for years now, to give my students as an encouragement for their studies," Kiên told Dân Trí newspaper.

He first learned about pencil sculpture by accident. After seeing a photo of a carved pencil online, he was impressed and started to study the technique.

He started by carving words on the body of wooden pencils, and around 2012, he began to create more sophisticated works, carving the pencils into figurines. His works are mostly made with bendable wooden pencils.

"At first, the pencils must be bent to the expected shape before being carved," he said.

"The figurine of a phoenix, for example, is made from two recycled pencils, with its body carved from the end of a pencil and its wing from another. Such elaborate work normally takes from a week to 10 days to complete." Each phoenix figurine is made from two pencils. Photo dantri.com.vn

Besides wooden pencils, Kiên also creates art from woodless graphite pencils, carpenter pencils or professional sketching pencils that must be bought from abroad.

"Wooden pencils are sold abundantly. But carpenter and woodless graphite pencils are harder to find. Whenever carving a rare pencil, I have to be much more careful in order not to break the material because it is hard to find a replacement," he said.

Kiên has also created his own sets of carving tools that vary according to the expected shape. For example, the body of the knife is made from a pencil or an ink pen, while its blades are made from a variety of materials such as hairpins, scalpels or needles.

Visitors to his house in the coastal city are instantly wowed by his collection of thousands of pencil sculptures that he has created over the past decade.

There have been over a hundred models of chains carved from pencils alone, each of which has a different motif. After completion, the works are covered with a layer of anti-mould varnish.

Kiên sketches new ideas on paper for calculation before starting to carve material. It takes him from a few hours to several days to complete a work, depending on the level of sophistication.

Aside from carving the pencil's wooden body, the teacher makes it more complex by carving its core, which requires great concentration and meticulous method. 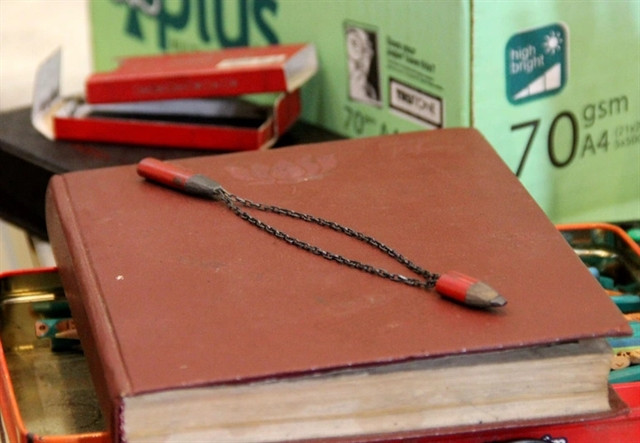 One of his most sophisticated artworks is a double chain that took him up to two years to finish. Photo dantri.com.vn

A notable item in his collection is a double chain made from the cores of carpenter's pencils that took him up to two years to finish.

The idea for the item came to Kiên five years ago, but after breaking a fourth pencil, he decided to put it on hold. It was not until 2019 that he returned to the unfinished idea. However, he failed three times again until he successfully created one of his most sophisticated sculptures.

"During the process of carving, a hard breath might even break the pencil core. I have to avoid imposing a strong impact, otherwise, the core will break," he said.

His passion for pencil carving has also inspired many of his students, and he has even established a Facebook page and a pencil sculpture club to share his experience with the public. 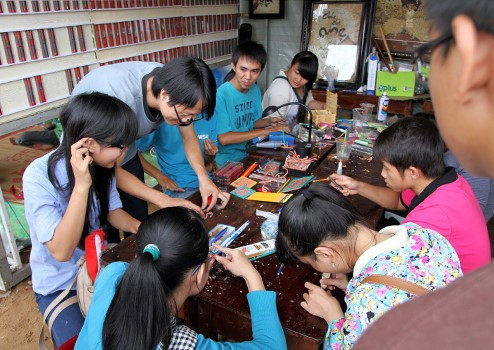 Kiên also opens a club to teach his students who have a passion for pencil sculptures. hoduongvietnam.com.vn

"I don't have much time to teach the students in person, so I let them take the initiative. Each carving step is pictured and posted to the group page so that they can try doing it themselves. If there are any problems, teachers and students will exchange messages for solutions," he said.

"As long as they have passion, I will try my best to instruct them until they can create a good first product of their own and maybe even earn money from it."