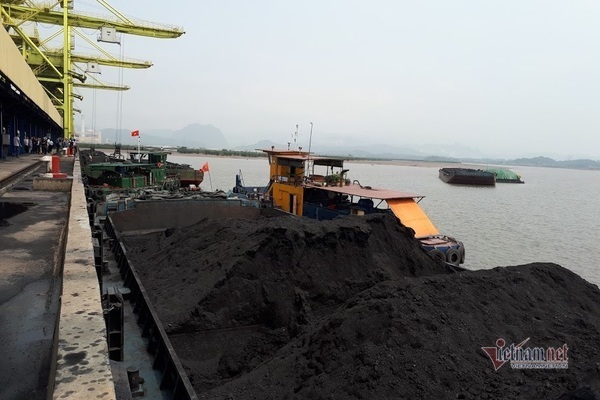 Hoa, former president of the Vietnam National Coal and Mineral Industries Group (Vinacomin), said that hard coal like anthracite that Vinacoal exploits is not suitable for thermal power generation, because this type of coal is not easily fired and needs to be mixed with oil to burn.

According to Hoa, in Australia the stripping ratio is 3-5 cubic meters of rock per 1 ton of coal, which means that mining one ton of coal requires mining three tons of waste rock.

Other countries stop mining coal if the prices are not high enough to ensure profits.

In the past, Japan exploited a lot of coal, but later stopped mining because it found that importing coal was preferable. The country now only maintains exploitation at one mine in the north, with annual output of 300,000-500,000 tons per annum.

Coal miners understand that it is a big waste to mix high-quality anthracite with cheap coal to use for electricity generation.

However, Vinacoal cannot export anthracite in large quantities. It has to seek permission from many ministries and can only export coal in accordance with the quotas allocated to it.

In recent years, Vinacomin and Dong Bac Corporation, another miner, have been allowed to export 2 million tons of anthracite each year.

Hoa proposed applying a mechanism which allows miners to sell coal in accordance with market prices and not be forced to sell coal at low prices, no matter who the buyers are.

A representative from Vinacomin has also asked for a more open mechanism to pave the way for the miner to export coal.

“Anthracite is a high rank of coal and it would be a big waste using it to generate electricity,” he said, explaining why Vietnam should continue to export coal though it now has to import tens of million of tons of coal each year.

“Anthracite and coal for thermal power generation are two quite different types of coal,” he said, suggesting that when building an energy development plan, it would be better not to fix the export volume.

“The coal not used domestically should be allowed to be sold. We will import the coal we need, and we will import as much as we need,” he said.

He went on to say that the energy development plan needs to contain predictions about production costs and outputs in the following years.

Miners, once reaching these thresholds, will have to figure out their plans, including plans about labor transformation, as well as shifting from open-cast mining to underground mining or even stopping exploitation.

In reply, Deputy Minister of Industry and Trade Dang Hoang An said coal exploitation, and importing and exporting, are macro problems which should not be decided based on prices only.

Regarding the opinion that when coal prices become too low it would be better to close mines and shift to use imports, An questioned what would happen if the world market fluctuates and it becomes very difficult to import coal and workers who left coal mines would not come back.

He said that it is necessary to carefully consider the import of primary energy. Vietnam needs to calculate how much it needs to import and how much to exploit domestically to ensure sustainable development.

Vietnam not only has to import coal, but also has to increase the import of LNG (Liquefied natural gas) to increase the proportion of gas-fired power in the total electricity generation sources to 21 percent by 2030.

An said the reliance on imports would be a problem, because no one can say for sure that the world market will be stable forever and that imports will always be easy to acquire.

Vietnam to increase imports of coal and gas