The Ministry of Education and Training (MOET) has examined and approved 46 textbooks of five sets of textbooks belonging to three publishing houses.

The new general education program has been applied since the 2020-2021 academic year. First graders now use new textbooks. 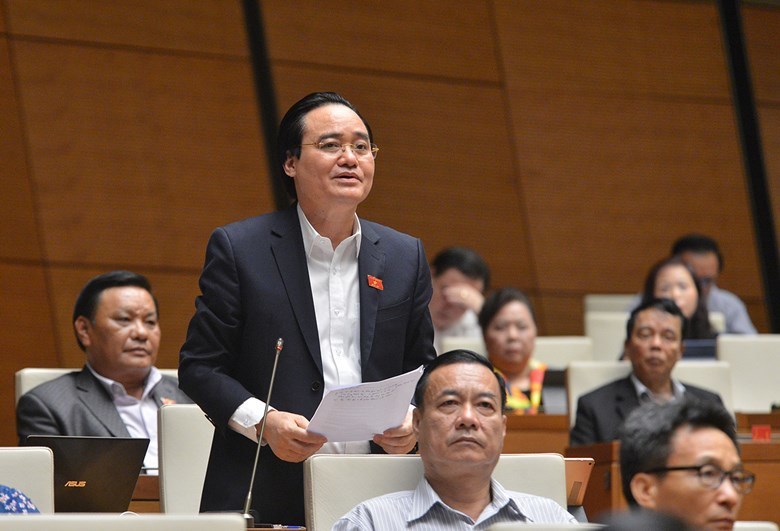 The textbooks have caused a furor among the public. Many parents and teachers have expressed their concern about the quality of textbooks and asked for reconsideration because of inappropriate content.

“We have requested the appraisal council, the authors and publishing house to listen to the comments. They are amending the content to make it suitable to first graders,” Nha said.

The Minister went on to say that textbooks will be regularly edited and amended to fit the practice, and the work won't end when textbooks are published. MOET, collecting opinions from parents and educators, has also requested to review other textbooks as well.

“We are all ears listening to National Assembly’s Deputies, people and teachers’ opinions and reviewing textbooks to make them better,” he said.

The reform of the general education program and textbooks will be implemented in a 5-year plan per a National Assembly resolution. This is the first year of implementation which deals with a large workforce, so shortcomings are unavoidable.

Replying to complaints from some National Assembly’s deputies that students are forced to buy books, Nha affirmed that textbooks are official and compulsory learning materials, while reference books are not compulsory at school.

“Reference books are produced by publishing houses, and directors of the houses are responsible before management agencies for the quality of the publications,” he said.

Regarding the complaint that the prices of new textbooks are twice that of old textbooks, Nha said the new textbooks are compiled in accordance with the new general education program with improved quality, higher number of pages, and better materials, so the production costs are higher.

Since new textbooks are compiled and published with no subsidy from the state, they cannot be as cheap as old textbooks. MOET has drawn up a plan to reduce the prices which has been approved by the Ministry of Finance (MOF).

MOET and MOF have asked the government to seek permission from the National Assembly Standing Committee to add textbooks to the list of products for price stabilization.

Dang Thi Phuong Thao, a National Assembly’s Deputy from Nam Dinh asked the government to suspend the implementation and urgently review the textbooks.

Meanwhile, Bui Van Phuong from Ninh Binh said the errors in the textbooks are not serious and they can be amended in the next editions.