Ministry of Transport sets up a hotline to receive bribery information

VietNamNet Bridge - In addition to the establishment of an inspection team to verify the bribery allegations, the Ministry of Transport has set up a hotline for receiving information concerning this case.

VietNamNet Bridge - In addition to the establishment of an inspection team to verify the bribery allegations, the Ministry of Transport has set up a hotline for receiving information concerning this case.

Another 10 officials must explain about railway projects 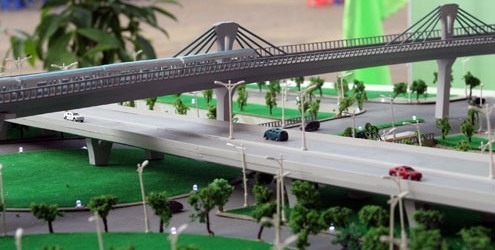 On the morning of March 27, Minister Dinh La Thang signed the decision to establish an inspection team to investigation of the bribery allegations involving officials of the Hanoi urban railway project.

The inspection team is led by Mr. Nguyen Van Huyen, the Ministry’s Chief Inspector. The three police officers who were assigned to work in the Ministry of Transport in January 2014 are also in this team.

The team has set up a hotline (0986093979) to receive information about the suspected case. Mr. Tran Van Trung, an inspector, is in charge of the hotline.

The same day, the inspection team began its work at the Hanoi overhead rail project No. 1. The other projects having the participation of the Japanese contractor JTC and the sub-projects of the Vietnam Railways Administration will be also inspected.

The inspectors will check the preparations of investment, the engineering design survey, the total cost estimates, public procurement, appointment of contractors and capital management...

The Ministry of Transport has requested more than 20 officials to present written accounts of their involvement in the early stages of the Hanoi railway project.