VietNamNet Bridge – A Chinese pear bought by the director of the National Institute for Food Safety and Hygiene Testing in Hanoi began to rot after an unusually long five month period.

VietNamNet Bridge – A Chinese pear bought by the director of the National Institute for Food Safety and Hygiene Testing in Hanoi began to rot after an unusually long five month period. 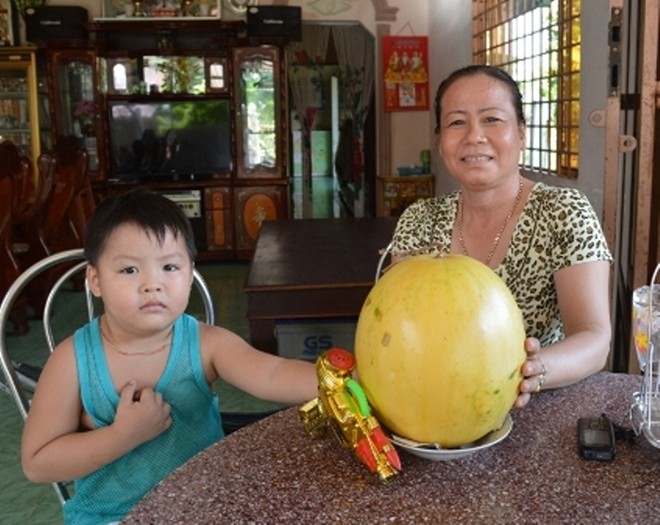 This watermelon is still fresh after seven months. It was bought by Ms. Duong Ngoc Thuy from Sa Dec City of Dong Thap Province.

At a meeting between the Ministry of Health and the authorities of the northern border province of Lang Son, Mr. Pham Xuan Da, Director of the National Institute for Food Safety and Hygiene Testing, said the pear was preserved in the normal environment and it did not spoil until five months later.

"The color of the pear was still fresh and it just looked slightly wilted a bit. However, it is difficult to discover what preservatives were used for the pear," he said.

Even fruit that Vietnam also produces are imported from China, such as mangoes with nearly 900 tons, watermelons with nearly 2,000 tons, grapefruit with 30 tons, plum with 94 tons, and tomatoes with 46 tons.

"There are over 2,000 types of plant protection chemicals used, but Vietnam is capable of testing only 600 substances," said Mr. Da.

Mr. Ly Kim Soi, Director of the Centre for International Health Quarantine of Lang Son province, said that three to four years ago, the provincial Health Department collected samples of Chinese fruit to test but experts could not identify the preservatives.

Mr. Tran Quang Trung, Director of the Food Safety Agency, said on September 8-9 the agency took 15 samples of Chinese melons, pears and apples at the Tan Thanh border gate in Lang Son to test. The agency would then collect samples at markets in Hanoi and Mong Cai border gate, Lao Cai province.

"Bananas are definitely domestic products. The use of substances to make bananas ripen quickly is performed by local traders, not the Chinese. It is necessary to test the fruits to define the chemicals," she said.

According to Mr. Hoang Dinh Hoan, Director of the Department of Health of Lang Son, Vietnamese fruit that China imported are also processed in the same way as the fruit exported to Vietnam before sales.