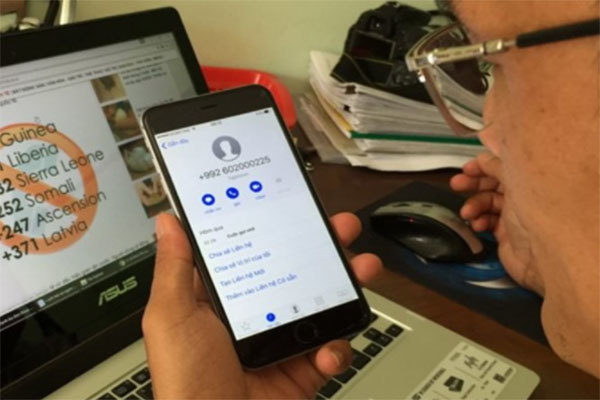 According to Authority of Telecommunications (AoT), social network users have recently been receiving warnings about calls from overseas, including ones with the prefix +375 (Belarus) and +371 (Latvia). Users have been warned that if they call back, their contact lists and the details about bank accounts or credit cards may be copied within three seconds.

They have also been warned that if they press * # 90 or # 09 * on mobile phones when answering the calls, callers will access their SIM cards and the calls will be charged on the receivers, who will be considered committing a crime.

AoT affirmed that these are spreading via social networks. in Vietnam, there is no call service in which receivers pay for calls (known as collect calls), including calls from overseas.

It also affirmed that if pressing * # 90 or # 09 * when answering the call, receivers’ information about credit cards and bank accounts will be stolen. It’s impossible to access users’ simcards even though someone implements such operations.

The agency has told users to be alert and not spread rumors which may cause anxiety to people. When getting a warning scam and unclear information shared on forums and social networks, users should report this to telecom carriers. After clarifying the information, they will give notices to subscribers.

There’re two possible scenarios. First, scam calls from overseas aim to entice receivers to call back and get hit with charges. The charge on the call to satellite phone numbers is VND99,000 per minute on average up to VND150,000 per minute.

The agency said despite regular warnings, many people have become the victims of the scams. It has told mobile network operators to apply technical solutions to prevent scam calls.

Vietnam wins big in the "battle" against scam, spam calls

In the first half of 2021, mobile carriers blocked more than 92,000 subscribers from spreading spam calls and stopped over 35 million fake calls.