VietNamNet Bridge – So far, the Miss Vietnam in three consecutive times have opted out of the beauty world arena.

VietNamNet Bridge – So far, the Miss Vietnam in three consecutive times have opted out of the beauty world arena. 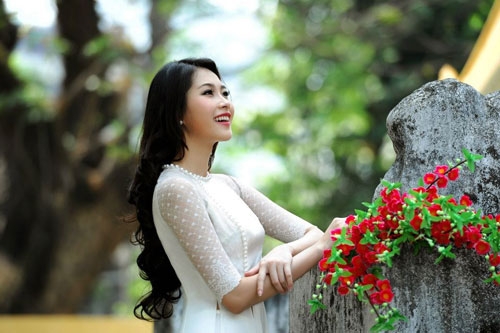 The majority of announcements of national beauty contests always noted: "The winner will represent Vietnam to compete in the world competitions."

However, the winners in the three consecutive Miss Vietnam pageants - Thuy Dung (2008), Ngoc Han (2010) and Thu Thao (2011) have not participated in any international beauty contest.

That's not to mention the two beauty queens of the Miss Vietnam Ethnic pageant – Hoang Nhung (2007) and Trieu Thi Ha (2011) who have also not taken part in the world's beauty arena yet.

Why? These girls did not want to join international pageants or they were not selected to represent Vietnam at these beauty contests?

Manager of Elite Vietnam (the firm that holds the right to choose Vietnamese contestants for international pageants) Thuy Hanh said that Vietnamese beauty queens are not confident enough to attend a big beauty arena such as the Miss World.

Miss Vietnam World Diem Huong said that the reasons come from both the beauty queens and the firm holding the rights to choose Vietnamese contestants for international beauty pageants. “I think most of them (the winners at beauty pageants) want to attend international beauty contests but it is important that whether they are selected or are sponsored or not. Some people were not confident about their ability so they refused."

In addition to the reasons mentioned above, there are many other reasons. In the case of Miss Vietnam 2008 Thuy Dung, her personal information and portrait were already published on the website of the Miss World, but at that time Thuy Dung did not meet the criteria for being licensed by the Performing Arts Agency (lack of qualifications).

Currently, Thuy Dung meets conditions to be licensed to representative Vietnam at international pageants but she is now the former Miss Vietnam.

Miss Vietnam 2010 Ngoc Han did not take part the Miss World 2010 pageant. She is now in the list of candidates but it depends on Elite Vietnam to choose her or not.

Miss Vietnam 2011 Thu Thao was introduced on the website of Miss World 2013 pageant, which will be held in Indonesia in September, but she refused to attend.

Thao explained that when Elite Vietnam invited her to compete with the 2013 Miss World pageant, she consulted the organizers of the Miss Vietnam. After discussion, everyone agreed that she could not participate in the competition this time.

“I personally feel that I have not had good preparation for this pageant. Also, I have moved to Ho Chi Minh City and the schedule at school is full, so I cannot participate in this contest," Thao said.

Although Vietnam took part in a dozen of world beauty competitions but the country still lacks professionalism right from the beginning. For example, in the country where the Miss Universe pageant is held, the winner of this contest will surely be chose for the Miss Universe competition of the world. In that manner, the winners of specific contests will represent the country in certain international beauty contests. If for some reasons the beauty queen cannot attend the pageant, the runner-up will replace her.

There is the question of why the organizers of Miss Vietnam pageant did not take into regulations or ask the contestants to commit to take part in the Miss World pageant if they are the winner. This will be so much easier for choosing candidates for the Miss World contest.

Some winners in beauty pageants said that they were reluctant to attend world beauty pageants because the right to choose the Vietnamese candidate is in the hands of a private company. The state agencies did not support or encourage them even though they went to these pageants as the national representatives.

"I always fulfill the assigned tasks as Miss Vietnam. Participating in the world pageants is not decided by me. When the candidate agrees and is licensed, she will be accompanied by many conditions on obligations and rights that not any candidate is able to meet," Miss Vietnam 2011 Thu Thao said.

"Public opinion sometimes made serious and even offensive criticism to many candidates. This made them tense and reluctant to do their mission at world beauty contests. Also, if the competition organizers, the unit that holds the right to choose candidates and sponsors work together from the outset like other countries, this field will be gradually brought into the path of professionalism," said Ms. Thuy Nga, CEO of Elite Vietnam.