The stall of Vietnam at an international tourism fair in Germany mistakenly promoted the image of Leshan Giant Buddha of China – the world highest stone statue.

VietNamNet Bridge – The stall of Vietnam at an international tourism fair in Germany mistakenly promoted the image of Leshan Giant Buddha of China – the world highest stone statue. The Vietnam National Administration of Tourism (VNAT) says that the incident happened by mistake and it reviewed the responsibility of some individuals. 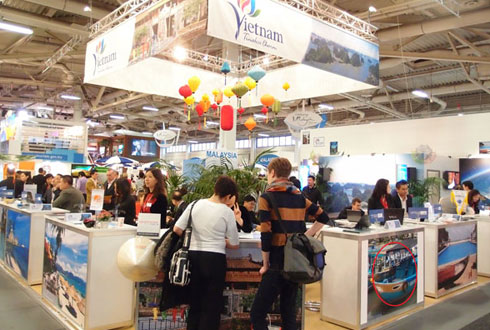 The stall of Vietnam at the tourism fair in Germany.


The VNAT, in cooperation with Vietnam Airlines and 26 tour operators attended the ITB Fair Berlin 2013, from March 6 to 10.

At the fair, Vietnam Airlines was responsible for building the booth, with the pictures provided by the VNAT. In the booth of the Vietnamese delegation, in addition to the common space and the area for Vietnam Airlines, the VNAT allocated 13 desks for 26 Vietnamese travel firms.

Photo: The booth of Vietnam. The circle is the location where the wrong image was pasted.

On the morning of March 6, before the opening of the fair, some officials of the VNAT discovered that one of the illustrative photos is not the picture of Vietnamese landscape and not the image provided by the VNAT.

They handled the situation by pasting a map of Vietnam on the wrong image and asked Vietnam Airlines to replace it with another picture.

According to the VNAT, the construction unit explained that by building a lot of booths at the same time, they mistakenly pasted the wrong picture in Vietnam’s booth.

While dealing with the trouble, an official of a Vietnamese travel firm took photos and posted them to his Facebook page. This official was asked to remove the images and related information on Facebook.

According to some travel companies attending the ITB Fair, the incident was quickly solved so many people in the Vietnamese delegation did not know about it and there was no foreign visitors who asked for tours to China as some newspapers had reported.

The VNAT’s officials say that this is a "big lesson" for the tourism industry in the process of implementing tourism promotion activities in the country and abroad. The agency has requested the related units and individuals to severely learn from experience.

The VNAT will also work with Vietnam Airlines to draw experience and review the coordination process and to define the responsibility of the individuals and groups concerned.