Vo Huy Cuong, deputy head of the Civil Aviation Authority of Vietnam (CAAV) on July 10 confirmed that CAAV has not received an application for a license from Vinpearl Air JSC.

This means that Vinpearl Air, a subsidiary of Vingroup, has not joined the aviation market, although it has set up a school to train pilots. 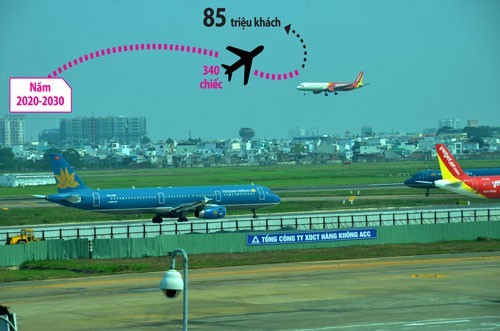 However, analysts believe that Vingroup, owned by the dollar billionaire Pham Nhat Vuong will, sooner or later, join the aviation market in its ambitious plan to invest in many business fields in the national economy. Established as a real estate company, Vingroup has invested in education, retail, automobile and technology as well.

Prior to that, the national information portal for business administration under the control of the Ministry of Planning and Investment showed that Vinpearl Air was established on April 22 with charter capital of VND1.3 trillion which operates in nine business fields, including passenger and cargo air transportation.

Vinpearl Air will be the next name to join the aviation market with Vietnam Airlines, Jetstar Pacific, Vietjet, Vasco and Bamboo Airways. Vietravel Airlines of Vietravel and Hai Au Seaplane of Thien Minh Group are also queueing up for licenses.

According to ACI, Vietnam is the fastest growing aviation markets.

IATA also predicted that Vietnam would be the fifth fastest growing market, with 150 million passengers a year by 2035.

In 2019, the Airports Corporation of Vietnam (ACV), which is managing 22 airports throughout the country, plans to serve 112.5 million passengers, higher than the 104 million in 2018.

According to Nguoi Lao Dong, the group of three airlines, namely Vietnam Airlines, Jetstar Pacific and Vasco holds the market share of 51 percent.

Meanwhile, Vietjet is holding 41.3 percent and Bamboo Airways 7 percent, though it just took off in early 2019.

A report shows that the number of passengers going through Tan Son Nhat Airport in 2018 was over 38 million, while it was designed to serve 25 million passengers.

“New entrants to the market will have to squeeze into slots in crowded airports and air traffic control becomes overloaded," said Nguyen Thien Tong, an aviation expert from the HCMC University of Science and Technology.

To deal with the existing problems, Tong suggested using smaller airports and aircraft.

Hai Au Aviation (HAA) has launched a flight between Da Nang and Dong Hoi, the capital city of Quang Binh province – the first service for aerial sightseeing between the two popular destinations in central Vietnam.