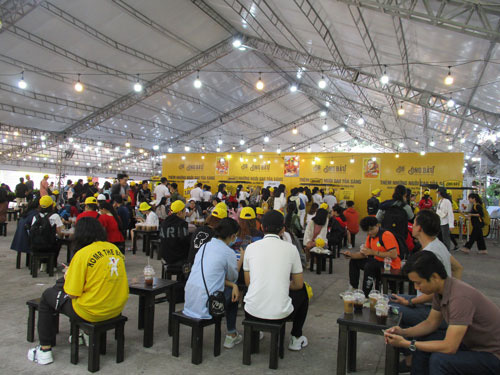 On opening day, the owner of the chain said more shops will be opened in the central business districts of HCM City and that many retail premises in advantageous positions are now available at very reasonable rents.

The retail premises can be leased at rent that is 10-20 percent lower because many businesses gave back the premises because of bad business during Covid-19.

“Many F&B shops had to shut down because of Covid-19. However, their failure could be an opportunity for many others,” he commented.

Soon after the epidemic was put under control, five take-away coffee kiosks under Viva-Vietnamese Coffee opened.

Vietnamese Coffee To Go JSC, the owner of the chain, plans to set up 10 similar kiosks and then find partners for franchising. Shyan Sunder, general director of the company, believes that the model will attract young people who want to start with small capital, and even bigger investors.

“With the low investment rate and high expected profit of over 300 percent, the business model will be very attractive not only in Vietnam, but all over the world,” he said, adding that about 5,000 coffee kiosks of this kind would be set up throughout the country.

In early June, Viva International opened Viva Reserve on Thanh Thai street in district 10. This is a model upgraded from the existing Viva shops available in nearly all districts in HCM City.

Following the first shop opening in February, 100 shops of the chain have been set up throughout the country, despite Covid-19. However, the plan is more ambitious: they hope to open 10,000 shops by 2022.