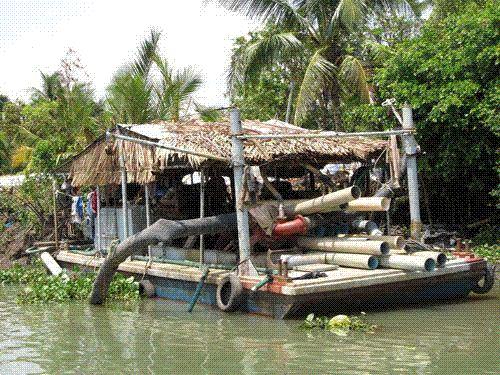 The Ministry of Transport has licensed enterprises’ projects on dredging some sections of the rivers, though they have got the required depth already. The projects have caused big worries to the local authorities and local residents, because the projects’ implementers, reasoning the dredging, have been trying to exploit sand for sale.

Thousands hectares of the land on the Dong Nai and Saigon riversides have drifted out to the rivers, while a lot of households have seen their land disappeared. Meanwhile, the Prime Minister in 2004 prohibited the sand exploitation on the Dong Nai River, from the lower course of the Tri An hydropower dam.

The Hiep Phat Steel Company Ltd has been licensed by the Ministry of Transport to dredge the river section, 16.3 kilometers in length, from the Ben Suc Bridge to the Phu Cuong Bridge. The total volume of works is about 750,000 cubic meters, to be implemented within 3 years.

According to the HCM City Department of Natural Resources and the Environment, the illegal land mining has been carried out on the dredging site, causing the serious landslide on the riverside. The agency reportedly has to spend hundreds of millions of dong to join forces with the city’s police and competent agencies to chase after the illegal miners.

It believes that the project implementer has been carrying out the illegal land exploitation under the mask of the river bed dredging. The agency has also cited the building material development plan in HCM City by 2020, which says that sand exploitation in the city area is prohibited, to express its viewpoint that it does not agree to the river dredging.

Besides the project on the Saigon River, Hiep Phat is also carrying out a project on dredging and upgrading the passage of the Dong Tranh River in Can Gio district.

The project has been approved by the Ministry of Transport. Hiep Phat was not required to submit the report on the possible impacts on the environment because of the small dredging capacity of 48,000 cubic meters per annum. Under the current regulations, the report is required only for the projects with the capacity of 50,000 cubic meters and more.

District 9 in HCM City, where there is the mainstream of Dong Nai and other river branches and canals, is the locality where the landslide has got serious. More than 9 hectares of land on the Tac riverside has fallen into the river.

Therefore, a senior official of the district’s authorities said the river dredging project of the Hiep Phuoc Maritime Investment and Development is like a danger hung over the local residents.

Despite the protests from the Dong Nai and HCM City people’s Committees, the project still has been licensed by the Ministry of Transport which allowed Hiep Phuoc to carry out works on the section river from Ong Nhieu canal to the Dong Nai Bridge.

According to the Ministry of Transport, the dredging is necessary to obtain the depth of -10m or -20m to be able to receive 10,000 DWT ships. However, experts said the required depth has been obtained already.