VietNamNet Bridge - The woman is believed to have driven a motorbike to the middle of the bridge and threw the child sitting behind her into the river and then plunging herself to the river, too.

VietNamNet Bridge - The woman is believed to have driven a motorbike to the middle of the bridge and threw the child sitting behind her into the river and then plunging herself to the river, too. 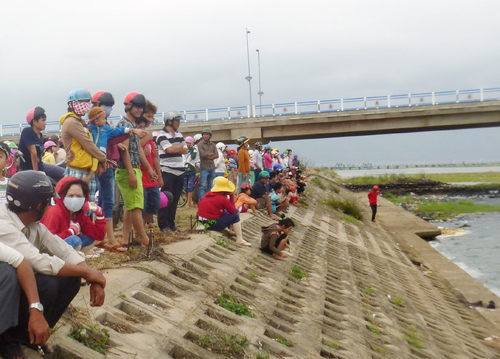 Many bystanders said they saw a woman riding a motorbike, with a baby behind, to the bridge. She suddenly stopped the vehicle amid the bridge. "I saw her hold the baby and threw the child to the river and they plunged herself after that. People immediately called for rescuers workers,” a witness said.

Fortunately, when the woman and the baby fell to the water, a fishing boat quickly rescued them and took them to the shore safely.

After being informed, the local police came to the scene and determined that the woman is Mrs. Nguyen Thi Bup, 29, from Dong Hoa district, Phu Yen province, and the 3-year-old boy is her son.

The mother and son were taken to the medical center for health checks.

Because Son was still in panic, the police could not get the testimony. According to her family, Son might commit suicide after having a conflict with her husband.

From early 2013, at least six people committed suicide on this new bridge; three of them died, mainly young people.