Investors are queuing up to enter the aviation market with trillions dong worth of capital, which is expected to remap the market.

A report from the Civil Aviation Authority of Vietnam (CAAV) showed that the growth of the aviation market has slowed down. 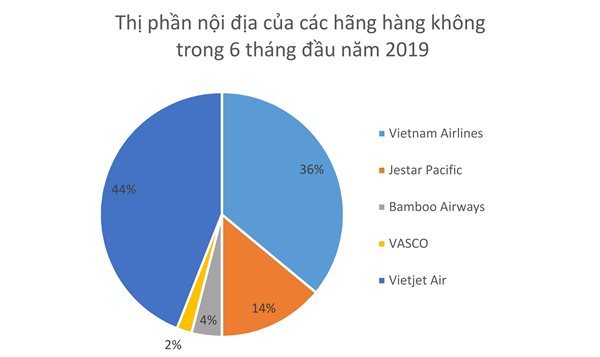 The number of international and domestic passengers in H1 increased by 14 percent and 7.6 percent compared with the same period last year, respectively, while the general number increased by 9.6 percent.

However, the aviation market remains attractive and the growth rate is expected to remain at around 10 percent per annum, double the region’s and the world’s growth rate.

That explains why more airlines are still queuing up to enter the aviation market, though it grew more slowly in H1. Earlier this year, Bamboo Airways was the only air carrier waiting for a license. There are now three carriers lining up.

Most recently, Vietravel announced it has completed the issuance of VND700 billion worth of bonds to prepare capital for the establishment of an airline. The bond buyers are domestic institutions which enjoy a fixed 9.25 percent interest rate in the first 15 months and 11 percent in the next months.

Vietravel has prepared for long-term capital mobilization by listing shares on UpCom on September 27. Vietravel shares entered UpCom at VND40,000 per share and the company’s capitalization value is VND500 billion.

Bloomberg has reported that Bamboo Airways hopes it can raise $100 million worth of funds from the IPO to be made next year. Prior to that, in early September, Bamboo Airways raised charter capital from VND700 billion to VND1.3 trillion and plans to use 30 aircrafts instead of 10.

Vinpearl Air has not shown its operation plan in detail but its expected charter capital is VND1.3 trillion.

Meanwhile, there is not much information about Kite Air, because it hasn’t list shares. The airline has charter capital of VND1 trillion.

There are many barriers for entry in the aviation sector. However, investors are still queueing up to join the growing market.

Meanwhile, Bamboo Airways, as reported by Bloomberg, hopes it can obtain 30 percent of domestic market share by 2020. The owner of Bamboo Airways has said it would be the first airline to open air routes to the US.