The Ministry of Industry and Trade’s (MOIT) report on industrial production and trade activities in H1 showed that Vietnam’s great achievements in containing the epidemic were highly appreciated by the international community.

The Ministry of Industry and Trade’s (MOIT) report on industrial production and trade activities in the first six months of the year showed that Vietnam’s great achievements in containing the epidemic were highly appreciated by the international community. 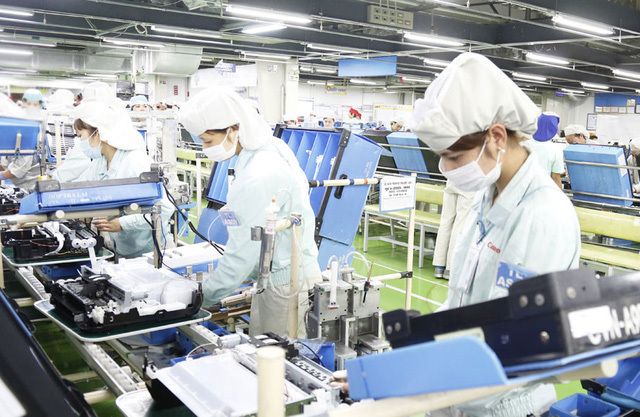 “There’s much information about the world’s technology groups planning to relocate their production bases to Vietnam,” the report said. “LG has relocated its production line from South Korea to Hai Phong City."

Nikkei reported that Apple plans to make 3-4 million AirPods in Vietnam in Q2, or nearly 1/3 of total AirPods output. Foxconn has set up a factory in Bac Giang. Panasonic Vietnam plans to begin manufacturing refrigerators and washing machines from September.

Regarding the manufacturing of electronics, computers and optical products, MOIT said though it was difficult to import components and accessories from China in the first months of the year because of Covid-19, the electronic industry still obtained great achievements in both industrial production index and export turnover.

As Samsung’s global turnover and output are expected to decrease because of the epidemic, Samsung Vietnam predicted that its export turnover would fall to $45.5 billion in 2020 from $51.38 billion in 2019.

After experiencing dark days, many industries have begun recovering.

The textile and garment industry in the first six months of the year faced problmd because the supply chain was disrupted when COVID-19 broke out in China, while partners cut orders and asked for delivery delays. Orders were mostly cut or delayed in May and June.

However, analysts believe that the industry will recover in Q2. The US, South Korea, Japan and Europe have loosened social distancing and consumer demand has been increasing again. Many Vietnamese companies have begun exporting products under contracts signed before.

In principle, garment exports increase most sharply in the last months of year as demand for garment products increases during Christmas and New Year holidays.

The footwear industry has suffered from both the lack of input materials as imports were interrupted, and it did not receive orders from importers. As a result, export turnover in H1 decreased by 6.7 percent compared with the same period last year.

With the EVFTA taking effect, footwear export turnover is expected to increase again in Q3 and Q4.

Speeding up infrastructure development and improving ease of doing business and vocational training are among things Vietnam can do to make itself more attractive to foreign investors post-Covid-19, according to VinaCapital.