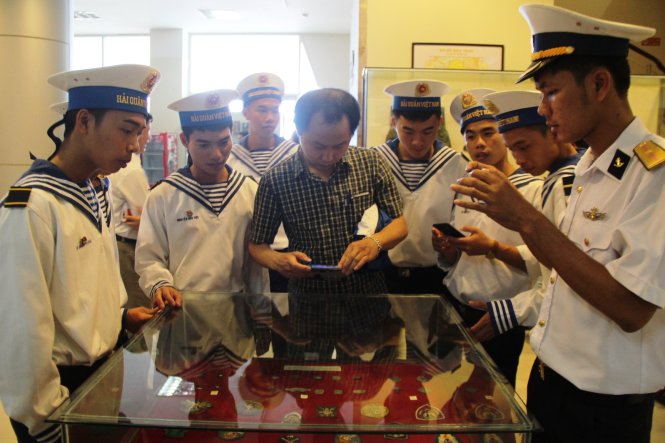 An exhibition featuring 150 photos, documents and other items displayed for the 40th anniversary of the central city's Liberation Day – March 29 – opened yesterday at the Da Nang Museum.

The exhibition also marked the 50th anniversary of the day the US Marine Corps first landed on the Da Nang beach during the American War: March 8, 1965.

The landing location, called Red Beach Two by the US Marines, is now Xuan Thieu Beach. It belongs to a four-star resort on Nguyen Tat Thanh Street.

The city's Historical Science Association also held a talk about the American War and the country's Reunification Day.

The exhibition will run through the end of March.

Young people nationwide are encouraged to join a writing contest on history launched by the HCM City Youth Union this week, as part of its cultural and community programme to mark 40 years of the South's Liberation Day (April 30) and national reunification.

The event, Tu Hao Su Viet (Proud of Vietnamese History), aims to help participants learn more about the country's history and improve love for the country among youth.

With the contest's theme HCM City – Proud of 40 Years of Its Development, organisers hope contestants will show their knowledge about the city's history in different periods.

The youth will be invited to participate in forums and exchanges with historical witnesses and veteran soldiers during the two-week event.

Contestants can send their works of no more than 1,500 words via the website: thanhdoan.hochiminhcity.gov.vn.

The awards ceremony will take place at the city's Youth Cultural House on April 30.

Around 10,000 copies of books be presented to readers at the 2015 Spring Book Festival in Hanoi on March 7 and 8, according to Vietnam News Agency.

The event at Alpha bookstore featured books for children, about living skills training and thinking development, and in fields such as literature, history, economy, and science.

Visitors to the event got 20-50% price discounts on all print books and the e-book “Game of was delivered free.

On the occasion of International Women’s Day on March 8, female visitors were entitled to a raffle and a chance to win one of 500 gifts from the organizer.

The 2015 Spring Book Festival was attended by renowned publishing houses in the country including Kim Dong, Tre, and Nha Nam.