Museum uncovers the cultural side of idyllic Phu Quoc Island

A holiday on beautiful Phu Quoc Island, in the southern province of Kien Giang , is not complete without visiting Coi Nguon (The Root) Museum, to learn about island history and life.

A holiday on beautiful Phu Quoc Island, in the southern province of Kien Giang , is not complete without visiting Coi Nguon (The Root) Museum, to learn about island history and life. 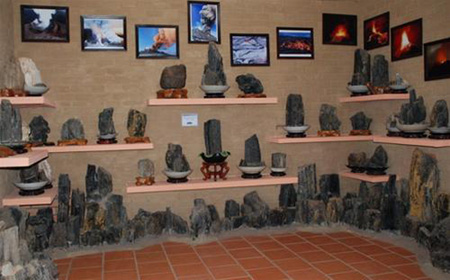 The five-storey private museum covers an area of 1,000sq.m on a hill in Duong Dong Town on the western coast. It displays nearly 5,000 objects, including 3,000 antiques salvaged from sites or sunken ships around the island.

"I was born and grew up in a family that has lived on the island for three-generations," Hue said.

He began collecting documents about Phu Quoc Island when he studied business administration in HCM City and when he returned to the island as a tour guide, he began to expand his collection.

"Every single thing here has its own story, telling people about the history and lifestyle of the island," Hue said. "Stone axes I found at the Cua Can riverside in 2007 are the oldest antiques here. They includes over 100 pieces dating back 2,000 years."

The axes are displayed on the second floor among jar tombs and antiques from the Ly and Tran dynasties, plus skeletons of dugongs and whales, crocodiles and wild boars.

The jar tombs contain remains believed to date back to the Oc Eo Culture between 1st and 7th centuries .

All artefacts have been appraised by the HCM City History Museum's Artefact Appraisal Council.

More than 2,600 are made from stone, pottery, bronze and fossil wood, identified from the 15th century to the early 20th century.

First impressions of the five-storey building are the number of windows, giving a view of the island and sea from every floor.

The walls are not painted, seemingly to stop them becoming dated. Drums and ceramic fish tanks are used to decorate outside walls.

Surrounding the building are installations which represent nature's forests and sea, including whale bones, tortoises and shells.

The first floor displays relate to island history when the first people settled down some 300 years ago.

On the third floor there's a model of wreck found 12 years ago on the eastern side of the island, together with hundreds of pieces of household pottery made in Thailand in the 15th century.

On the fourth floor, visitors can learn more about residents' daily lives and work. There's model of house with walls made from the bark of the kien kien (Anisoptera scaphula) tree, a house style that was once typical of the island's northern part.

The museum also has a sea eagle reserve where beautiful black and white birds spread their wide wings and call out.

Le Thi Minh Ly, former vice director of the Ministry of Culture, Sports and Tourism's Culture Heritage Department, said the museum was very useful and some of the artefacts there could be national treasures.

"It's worth going there to enrich your knowledge and relax," he said.

The newly opened international airport on the island ensures there are plenty of visitors to the island.

Hue said he established the museum to show them there was more to the island than white sand beaches and golden sunsets.

He also wanted to inspire young islanders to learn more about their home.